Law360 (September 11, 2020, 1:48 PM EDT) -- The Eleventh Circuit ruled Friday that Florida can require former felons to pay all fines and fees before allowing them to vote, rejecting arguments that the financial obligations were unconstitutional poll taxes. 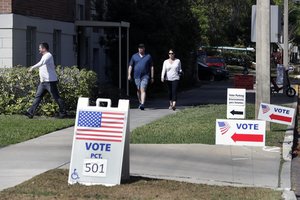 Voters head to a polling station in Orlando, Florida, in March. The Eleventh Circuit ruled in Florida's favor Friday after a lower court had said the state couldn't bar ex-felons who are unable to pay fines and fees from voting. (AP Photo/John Raoux, File)

In a 6-4 en banc decision, the appeals court said the former felons who filed a challenge to a state law requiring payment of fees and fines as a condition of voting had not shown that their constitutional rights had been violated because the financial obligations are directly tied to their convictions and are "highly relevant to voter qualifications."

That makes Florida's requirement different from the $1.50 poll tax struck down by the U.S. Supreme Court in 1966's Harper v. Virginia Board of Elections

, according to the majority opinion, penned by U.S. Circuit Judge William Pryor.

"The watered-down version of Harper that the felons would have us apply ignores the crucial distinction between poll taxes and Florida's reenfranchisement law: poll taxes are never relevant to voter qualifications, but laws that require the completion of a criminal sentence are," the opinion said.

The ex-felon plaintiffs are fighting S.B. 7066, the state law passed last year that implemented Amendment 4, a voter-approved state constitutional amendment that restored ballot rights to former felons. The law requires them to pay all legal financial obligations before being able to vote.

On May 24, U.S. District Judge Robert Hinkle sided with the challengers after a bench trial and ruled that the expenses imposed on ex-felons to fund government operations are "taxes in substance, though not in name," and the state cannot prevent those who are unable to pay those legal financial obligations from voting.

But on Friday, the Eleventh Circuit said Judge Hinkle got it wrong because court costs and fees are imposed as part of a criminal sentence and are linked to culpability. The fact they raise revenue does not change them from criminal punishment into a tax, according to the opinion.

Because the Supreme Court has explicitly permitted states to disenfranchise felons, felons cannot complain about a fundamental right to vote, according to the appeals court. Therefore, only rational basis review is necessary, and the state passes the test because it has a rational goal of ensuring that felons complete all the terms of their sentences, including financial obligations, before voting, according to the opinion.

"Florida's voters intended only to reenfranchise felons who have been fully rehabilitated, and Senate Bill 7066 drew a rational line in pursuit of that goal," the court said.

The Eleventh Circuit also dismissed arguments about due process concerns regarding the steps ex-felons need to take to ascertain their eligibility to vote and determine how much they owe in fines, fees and restitution.

The issue played a central role in the weeklong trial in April, where both experts and state officials testified that determining what an ex-felon owes can be a long, confusing process that often leads to conflicting results. One political scientist testified that she and a team of graduate students had difficulty tracking down the legal financial obligations for 153 randomly selected felons and found inconsistencies in the information for all but three of them.

But the appeals court said Florida provides an adequate process for individual determination of ineligibility and entitles voters to a pre-deprivation notice and a hearing before removing them from the voter registration system.

"The due process clause does not require states to provide individual process to help citizens learn the facts necessary to comply with laws of general application," the court said.

In a lengthy dissent, U.S. Circuit Judge Adalberto Jordan slammed this assessment, saying the majority "breezes over the infirmities of the process."

Judge Jordan leaned heavily on testimony from the trial, in which the state said it will take more than six years to screen each ex-felon for unpaid legal financial obligations. He noted that the budget analysis for S.B. 7066 projected a need for 21 new employees at the state's Division of Elections, but the Legislature allocated no funds for new employees, and the division has hired no one to help with the extra work.

"That is a pretty good (and damning) indication of Florida's disdain for Amendment 4," Judge Jordan said.

The state has no central way for ex-felons to look up how much they owe, and the Division of Elections has issued no guidance or rule to county clerks to ensure that the rules are equally applied across the state, according to the dissent.

, in which the Supreme Court stopped Florida's recount in the 2000 presidential election because a lack of uniform rules and standards led to a disparate treatment of voters around the state. In this case, whether a felon is deemed eligible to vote can vary county by county, the judge said.

"What a great system Florida has set up," he said. "If the stakes were not so high, it would be laughable and deserving of a Dave Barry article lampooning the state's bureaucratic incompetence and malfeasance."

The judge accused the majority of applying "the most deferential form of rational basis review" and argued that even if the right to vote for felons is not considered fundamental, it should be considered with at least "a more exacting form of rational basis review." And Florida's policy fails that test, he said, because a system that seeks to encourage felons to pay their financial obligations is not rational if the vast majority cannot pay.

Fred Piccolo, a spokesman for Gov. Ron DeSantis, said the Eleventh Circuit's ruling affirms what everyone, both proponents and opponents of Amendment 4, agreed on during oral arguments before the Florida Supreme Court when the amendment was being considered for the ballot — that all terms of a sentence means all terms.

"There are multiple avenues to restore rights, pay off debts, and seek financial forgiveness from one's victims," Piccolo said. "Second chances and the rule of law are not mutually exclusive."

Daniel Tilley, the legal director for the ACLU of Florida, said DeSantis and Florida lawmakers have worked to obstruct Amendment 4 and put a price tag on voting.

"While today's court ruling has, temporarily, permitted that behavior by Gov. DeSantis, there are many voters who meet even the extreme requirements of this unconstitutional law," Tilley said. "Working with our partners, we will continue to inform those voters of their eligibility so that as many returning citizens as possible are able to participate in our democracy."

The state is represented by Charles J. Cooper, Peter A. Patterson, Steven J. Lindsay and Shelby L. Baird of Cooper & Kirk PLLC, Joseph W. Jacquot, Nicholas A. Primrose and Joshua E. Pratt of the Executive Office of the Governor and Bradley R. McVay and Ashley E. Davis of the Florida Department of State.

Update: This article has been updated with comment from the parties and details from the opinion.