Law360 (June 17, 2020, 8:45 PM EDT) -- The U.S. has pulled away from negotiations at the Organization for Economic Cooperation and Development to overhaul the global digital tax system, according to top officials at the Treasury Department and the Office of the U.S. Trade Representative. 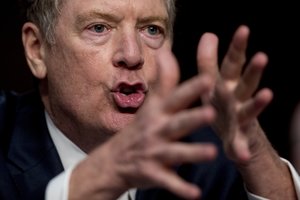 The apparent departure comes months after the U.S. and European officials reached a standstill over an OECD proposal to give countries more tax revenue from countries that do business in their jurisdictions, even if only through the internet. Without an agreement, President Donald Trump's administration is poised to launch trade wars against several countries that are moving ahead with special digital taxes that target revenue earned from companies like Google LLC and Amazon.com Inc., which U.S. officials consider discriminatory.

Testifying before the House Ways and Means Committee and the U.S. Senate Finance Committee, U.S. Trade Representative Robert Lighthizer confirmed reports that U.S. Treasury Secretary Steven Mnuchin had notified other negotiating partners that the U.S. was stepping away.

"Unfortunately, the other countries are completely dug in on this," Lighthizer told the Finance Committee. "We have to show our strength and what the secretary said is, 'If you all think you're going to get a consensus around taxing our companies unfairly, we're not going to be a part of it.'"

Monica Crowley, assistant treasury secretary for public affairs, wrote on Twitter that the U.S. "suggested a pause in the OECD talks on international taxation while governments around the world focus on responding to the COVID-19 pandemic and safely reopening their economies."

The department did not respond to requests for further details.

Just over six months ago, more than 100 countries seemed poised to agree on a ground-breaking plan that would fundamentally change some of the basic principles underpinning international taxation. The plan, which would have required a multilateral treaty or group of treaties to enact, was a response to growing public anger over perceived tax avoidance by the world's largest technology firms, most of which happen to be American.

Most government officials and tax experts agree that the rules put in place by tax treaties, often based on where a company is physically present with facilities or staff, doesn't adequately capture the modern online economy. Nor does it always prevent companies from moving valuable intangible assets, such as patents or copyrights, to low-tax jurisdictions where little other economic activity occurs.

But that's where most of the consensus breaks down. France was one of the first countries to enact a 3% digital services tax, which targets revenue from certain online activities such as advertising and data collection. Many other countries followed, and the trend has now spread from Europe to Asia and the developing world.

The U.S. threatened tariffs against France over the law, with Trump suggesting taxes on the top French wine. The U.S. and France ultimately reached a detente, with the U.S. holding off on potential tariffs until 2021 while France holds off on collecting the tax. The U.S. more recently has begun investigations of other countries that have gone ahead with digital services taxes, which opens the door to potential retaliatory tariffs as well.

The end of 2020 is also the deadline for the OECD's digital project, which began in 2017 with a request from the Group of 20, a consortium of the world's top economies. Leaders from the U.S. and Europe had hoped that they could reach an agreement for a broader solution, which would not target specific industries or transactions but also capture more revenue from digital commerce.

Over 2019, the OECD leadership unveiled drafts of a proposal that would apportion more taxable income to market jurisdictions — where consumers or online users are located — based on a percentage of a multinational company's global sales. Under this new system, countries could apply this tax regardless of whether a company is physically present in the jurisdiction.

But the U.S. balked at the proposal in December, telling the OECD that it would not agree to this plan unless it was offered as an optional alternative to the existing system. In the months that followed, the sides continued to negotiate but did not appear closer to an agreement.

The novel coronavirus pandemic has only heightened non-U.S. countries' desire to collect more tax revenue from online companies, and has not lessened U.S. opposition to digital-specific levies. Despite the complicated logistics of continuing negotiations without in-person meetings, OECD officials have expressed commitment to the Dec. 31, 2020, deadline.

Speaking before Congress, Lighthizer expressed some optimism that a deal could be reached.

"The answer is is that we need an international regime that doesn't focus on certain sides and certain industries, but where we generally agree on how we're going to tax people internationally," he told the Ways and Means Committee. "I think there's clearly room for a negotiated settlement."

Reacting to the news of the US suspending its involvement in the talks OECD Secretary-General Angel Gurría said in a statement on Thursday that "addressing the tax challenges arising from the digitalization of the economy is long overdue: all members […] should remain engaged in the negotiation toward the goal of reaching a global solution by year end."

In the absence of a multilateral solution more countries will move to impose unilateral digital services taxes, and those that have them will no longer feel compelled to hold them back, risking a trade war, Gurría said. "A trade war, especially at this point in time […] would hurt the economy, jobs and confidence even further."

Update: This story has been updated to add comment from the OECD.