Law360 (March 25, 2020, 6:17 PM EDT) -- An immigrant was ordered released from the custody of U.S. Immigration and Customs Enforcement Wednesday when a federal judge said he wasn't comfortable telling attorneys to avoid coming to court during the coronavirus pandemic while incarcerating someone who had not been charged with a crime. 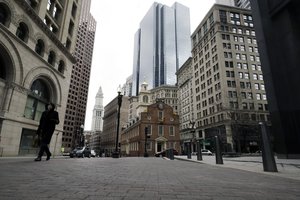 An immigrant was ordered released from government custody in Massachusetts on Wednesday due to concerns about the spread of COVID-19. Above, the sidewalks in Boston were nearly empty on Tuesday. (AP)

Salvador Rodriguez-Aguasviva, who is a member of a class of immigrants and their spouses suing ICE over its removal policies, must be released no later than Thursday, U.S. District Judge Mark L. Wolf ruled.

The judge had scheduled an in-court hearing for Thursday to discuss the motion seeking Rodriguez-Aguasviva's release, which was filed by the ACLU of Massachusetts. But Judge Wolf told attorneys during a telephone hearing that he learned Wednesday a courthouse staffer had tested positive for COVID-19 and was also told ICE Acting Field Office Director Todd Lyons, who was on the call, was sick with flu-like symptoms himself. Given the crisis, he said he could decide to release Rodriguez-Aguasviva without having him hauled into court.

"I wouldn't feel comfortable telling you it's too dangerous to come to the courthouse and saying, 'Perhaps it's not too dangerous for someone who has not been charged, let alone convicted, of any crime to be in jail for health reasons during this pandemic,'" Judge Wolf said.

Rodriguez-Aguasviva will have to wear an ankle monitor and remain in his Lawrence, Massachusetts, home with his wife. He is facing a final order of removal and has been held in custody in Plymouth while Judge Wolf decides the suit, which accuses ICE of adopting a policy of removing immigrants while they apply for a provisional unlawful presence waiver.

The novel coronavirus had affected more than 1,800 Massachusetts residents and killed 15 as of Wednesday afternoon.

"We have become increasingly concerned with Salvador's health and safety in the Plymouth County Jail," an attorney for the class, Stephen Provazza of WilmerHale, told Judge Wolf as he asked him to order his client's release before the virus "explodes" within the prison population.

"We know a sheriff's employee working in Plymouth County Jail has tested positive for COVID-19, so it seems to be a question of when, not if, the disease will spread," Provazza said.

Arguing for the government, Max Weintraub of the U.S. Department of Justice's Civil Division said jail officials have been working closely with the U.S. Centers for Disease Control and the state's Department of Public Health to keep the facility safe. He said the petitioners did not clear the bar to warrant Rodriguez-Aguasviva's release.

Weintraub also argued that, while there is no suggestion Rodriguez-Aguasviva is dangerous to the public, he may be a flight risk because he failed to appear once in the past. The only thing standing between him and removal from the U.S. is Judge Wolf's stay decision as the case plays out, Weintraub said.

But the judge found that the ongoing health crisis tipped the scales in Rodriguez-Aguasviva's favor, particularly because his is a civil immigration detention, not criminal.

And, while Rodriguez-Aguasviva is in jail with many people charged or convicted of crimes, "he has not been charged with or convicted of anything," Judge Wolf pointed out.

As the pandemic spikes in the U.S., advocates and some law enforcement officials have pushed to reduce the prison population wherever possible to help limit the spread of the disease. The ACLU and two defense attorney organizations on Monday asked the Massachusetts Supreme Judicial Court to take "extraordinary" steps to scale back the number of people in custody, and the high court agreed to hear arguments via telephone next week.

On Wednesday, the ACLU also filed separate lawsuits on behalf of two other detainees at Plymouth who have underlying health conditions and are at risk if they contract the coronavirus. The Massachusetts suits follow similar petitions filed by the ACLU in Maryland and Washington state.

Filed in 2018, the lawsuit to which Rodriguez-Aguasviva is a party claims the Trump administration's U.S. Citizenship and Immigration Services has coordinated with ICE to systematically target undocumented spouses trying to use the DHS-sanctioned process of pursuing green cards. Last May, Judge Wolf certified a class and said ICE had violated federal regulations for a process known as post-order custody review in the cases of two class members.

The judge has chastised the federal agency for not following its own protocols, including during a hearing last October when Judge Wolf found that ICE was routinely violating immigrants' due process by not interviewing them as part of their custody reviews.

The government is represented by Mary L. Larakers, J. Max Weintraub and William Weiland of the U.S. Department of Justice's Civil Division and Eve A. Piemonte of the U.S. Attorney's Office for the District of Massachusetts.