By Vin Gurrieri
Law360 is providing free access to its coronavirus coverage to make sure all members of the legal community have accurate information in this time of uncertainty and change. Use the form below to sign up for any of our daily newsletters. Signing up for any of our section newsletters will opt you in to the daily Coronavirus briefing.


Law360 (May 19, 2020, 3:59 PM EDT) -- Lax safety standards at several Chicago-area McDonald's restaurants during the novel coronavirus pandemic have created a public health risk, a group of workers said in a class action Tuesday, citing a dearth of clean protective gear and a lack of safety training as among the biggest problems. 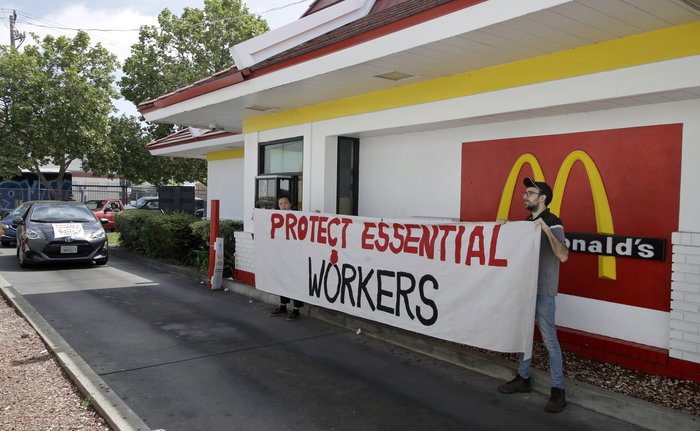 People protest what they say is a lack of personal protective equipment for employees as they close down the drive-thru at a McDonald's restaurant in Oakland, California, last month. (AP Photo/Ben Margot)

The unsafe practices allegedly include workers being forced to work in close quarters with colleagues and customers who might be asymptomatic carriers, having to reuse dirty masks or gloves if they were provided with such protective gear at all, and being directed to stay mum if workers were absent or suspected of being sick.

"Plaintiffs bring this case because, in the face of these severe risks, the steps defendants are taking to contain COVID-19 are plainly inadequate," the complaint said. "Defendants have a responsibility to their workers, customers, and the public to ensure that the restaurants do not become a hub for spread of the virus. … Yet, at the stores where the worker plaintiffs are employed, McDonald's has failed to take adequate steps in response to the pandemic [and] these stores are operating in disregard of expert recommendations and government guidance on how to best protect workers and customers from spread of the disease."

McDonald's locations in Chicago have remained open as "essential" businesses even as emergency orders by public officials have forced many other businesses to close their doors.

But even though health authorities like the Centers for Disease Control and Prevention have issued guidelines for businesses that remain in operation to prevent the spread of the coronavirus and McDonald's itself has "centralized" its response to the virus to assuage safety concerns, the plaintiffs in Tuesday's suit claim that the reality for workers on the ground is far from what the recommended best practices are.

The suit includes numerous examples of unsafe practices that the four Chicago locations purportedly had in place that run contrary to government guidance and expert recommendations for responding to the pandemic.

Besides a lack of safety equipment, the workers claimed that the stores where they work didn't provide hand sanitizer and didn't offer safety training to employees. In some instances, workers were accused of stealing gloves if they asked for new ones and managers directed them to not talk about colleagues who were infected or who were absent, according to the suit.

One of the named plaintiffs, Taynarvis Massey, alleged that managers at her store never told her co-workers that she had tested positive for the virus. At another store, managers allegedly told workers they didn't need to adhere to social distancing guidelines so long as they keep any contact with others to under 10 minutes, according to the complaint.

The workers and their family members noted in their suit that McDonald's workers in the Chicago area have lodged "at least four complaints" in recent weeks with the U.S. Occupational Safety and Health Administration over purportedly unsafe working conditions, but that the federal agency hasn't inspected any of the restaurant locations and hasn't ordered the operators of those sites to address the issues the workers have raised.

The proposed class would include two subgroups, one that consists of employees who have worked at the restaurants at issue in the suit since April and another of people who live with those employees. While the complaint said the potential size of the class is not yet known, it will likely number in the hundreds.

The suit seeks an order that forces McDonald's to supply adequate PPE and hand sanitizer to workers and to stop any practices that make workers use PPE in an unsafe way. The plaintiffs are also asking that the court order McDonald's to implement policies mandating face coverings for workers and customers as well as inform workers if one of their colleagues is suspected of being infected and train workers on precautionary measures.

Although they aren't directly employed by McDonald's, the workers' family members who are named plaintiffs claimed that they are nonetheless "likely to suffer the consequences of infections" that originate in the workplace.

"Not only may they be forced to care for — or grieve — a sick relative, but they themselves risk infection given the highly contagious nature of the disease," the complaint said.

Daniel Rosenthal of James & Hoffman PC, a lawyer for the workers, said in a statement that Illinois courts "have long recognized their authority to order the alleviation of a public nuisance, which includes conduct contributing to the spread of infectious disease."

"Workers and their family members are invoking this legal doctrine to seek adequate measures to protect not just themselves, but the public, too," Rosenthal said.

Tuesday's suit is backed by Fight for $15 and the Service Employees International Union.

McDonald's issued a statement to Law360 on Tuesday saying that it disagrees with the "inaccurate characterizations" presented in a media release announcing the legal action, which the company says isn't representative of what's really happening in McDonald's 14,000 nationwide locations.

"While the SEIU is spending time sharing misinformation, McDonald's and our 2,000 franchisees are focused on keeping more than 800,000 crew and managers employed in safe environments to serve healthcare workers, first responders and communities during this pandemic," the company said. "Crew and managers are the heart and soul of the restaurants in which they work, and their safety and well-being is a top priority that guides our decision making."

McDonald's also noted that since February it has updated dozens of processes to keep workers and customers safe and issued a nearly 60-page guide outlining standards that restaurants nationwide must put in place. Those standards include things like installing protective barriers, adhering to social distancing guidelines for workers and patrons, and mandating protective gear like gloves and masks, with McDonald's stating that over 100 million masks have been distributed to workers to date.

Besides the suit in Illinois, McDonald's workers in California filed administrative actions against the fast-food giant with the California Labor & Workforce Development Agency and the California Occupational Safety and Health Administration. In three separate notices that were filed under California's Private Attorneys General Act, the workers accused McDonald's of engaging in a pattern of behavior that shows it failed to protect its workers during the pandemic and created safety risks.

Lauren Teukolsky, an attorney for the California workers, said Tuesday in a statement that the fast-food giant's frontline workers "are scared and angry" because their health isn't being adequately safeguarded.

"McDonald's is still not protecting them and Cal/OSHA is missing in action, even though these workers filed formal Cal/OSHA complaints more than a month ago," Teukolsky said. "If the need to protect workers and customers from the scourge of COVID-19 isn't motivation enough for McDonald's, maybe the threat of massive civil penalties through legal action will be. McDonald's workers should not have to choose between their lives and a paycheck."

The California workers are represented by Michael Rubin of Altshuler Berzon LLP and Lauren Teukolsky of Teukolsky Law.

Counsel information for McDonald's was not immediately available.