Law360 (July 13, 2020, 12:27 PM EDT) -- As a lawsuit by Harvard and MIT speeds toward a Wednesday ruling, Massachusetts Attorney General Maura Healey and 17 other AGs filed their own suit Monday seeking to block a Trump administration policy barring foreign students from the U.S. if their colleges go online during the COVID-19 pandemic. 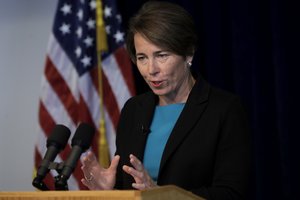 Healey was joined by 16 other states and the District of Columbia in her suit, which was announced just moments before a scheduled rally with international students on the steps of the Massachusetts State House. The AGs' suit is similar to the one filed last week by the Cambridge universities and includes a motion for a preliminary injunction to keep the policy from going into effect.

"The Trump administration didn't even attempt to explain the basis for this senseless rule, which forces schools to choose between keeping their international students enrolled and protecting the health and safety of their campuses," Healey said in a statement Monday.

"Massachusetts is home to thousands of international students who make invaluable contributions to our educational institutions, communities, and economy," she added. "We are taking this action today to make sure they can continue to live and learn in this country."

The states' suit, like the one brought by the colleges, has been assigned to U.S. District Judge Allison D. Burroughs. The Harvard and MIT case is due in court Tuesday, when attorneys for the schools and the government will argue over the injunction bid.

Judge Burroughs has said she will rule on the issue by Wednesday, which is the deadline set by the federal government for universities to let U.S. Immigration and Customs Enforcement know what their plans are for in-person instruction this fall.

Healey argued there is no rationale given for ICE's abrupt policy shift and that the federal government "failed to consider the health and safety of our students, faculty, staff, and the untold other residents of our states with whom they interact."

ICE also did not consider the costs and chaos the sudden change would impose on students, some of whom are already trying to return to the U.S. and being denied entry, as well as schools who are scrambling to figure out what their fall semester will look like.

Joining Massachusetts in the lawsuit are the attorneys general from Colorado, Connecticut, Delaware, the District of Columbia, Illinois, Maryland, Michigan, Minnesota, Nevada, New Jersey, New Mexico, Oregon, Pennsylvania, Rhode Island, Vermont, Virginia and Wisconsin. The suit also includes declarations from universities and other institutions who say they are affected by the new rule.

University of Massachusetts President Marty Meehan said, "These rules will create costly, confusing and unnecessary hurdles for our international students and our campus communities, place millions of dollars in university revenue at risk, and deprive the Commonwealth's economy of a valuable source of talent and innovation."

Ralph Martin, senior vice president and general counsel at Northeastern University, called the rules "unfair" and added that they "have the potential to endanger the safety of campus communities during the COVID-19 pandemic."

An ICE representative declined to comment Monday, citing the pending case. But, just moments after Healey's suit was filed, the agency filed its opposition to a preliminary injunction in the Harvard and MIT case, arguing that it has the discretion to implement the policy change.

In addition to the Harvard and MIT suit and the one filed Monday by the states, several other suits have been filed around the country attacking the policy, including one on Friday by Johns Hopkins University and another filed the same day by a group of international law students at the University of California Irvine. A slew of Western colleges and universities also filed a complaint on Monday, saying that their plans to offer in-person or online classes — based on guidance from ICE in March that F-1 visa students would be exempt from having to attend the majority of their classes in-person — "were thrown into disarray" when ICE rescinded that exemption and then, demanded a new operational plan from schools offering only online classes in less than 10 days.

On Monday, New York Attorney General Letilita James filed her own complaint over the policy, pointing out that ICE's course reversal comes "amid record-setting COVID-19 infection rates." Despite showing waning numbers now, the Empire State was the hardest hit by the pandemic and the suit notes that more than 32,000 people have died and over 406,000 have tested positive for COVID-19.

"These statistics – and the resulting devastation – are exponentially higher as compared to when ICE initially issued its 'emergency' student visa waiver in mid-March," the complaint states. "ICE's Directive is in line with the federal administration's stated goal of quickly re-opening schools, callously ignoring prevailing public health guidelines calling for sustained social distancing and tailored reopening plans of only the most essential activities."

In a statement, James said "International students should never be used as political fodder to force colleges to reopen their doors, but the president's inability to remove politics from public health decisions endangers us all."

The various complaints have alleged that the Trump Administration is using the threat of expelling international students as a means to leverage colleges into returning to campus in the fall.

New York is represented in its suit by Morenike Fajana, Carolyn Fast, and Joel Marrero of the Office of the New York State Attorney General.

Counsel information for the federal government was not immediately available.

Update: This story has been updated with additional information and with comments from the parties.