Law360 (August 3, 2020, 11:07 PM EDT) -- President Donald Trump on Monday ordered a potentially long-term extension of reimbursements for telehealth services that have exploded in popularity during the coronavirus pandemic and once again claimed to be putting the finishing touches on a "tremendous health care plan." 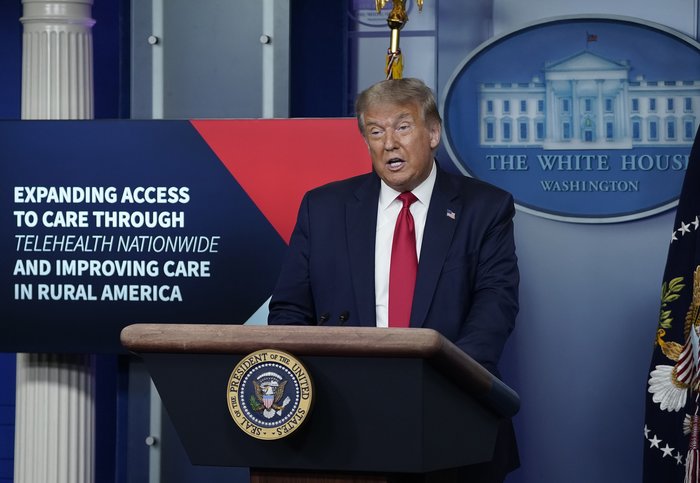 President Donald Trump speaks during a news conference Monday at the White House after announcing an executive order involving telemedicine and reimbursement for rural providers. (Photo by Drew Angerer/Getty Images)

Trump discussed the order at a Monday evening press conference that also featured bold statements about progress on both a COVID-19 vaccine and a mysterious health care plan that he started teasing two weeks ago.

Here are three developments to know.

Monday's order observed that virtual visits to the doctor's office skyrocketed after the Centers for Medicare & Medicaid Services in March began loosening telehealth payment restrictions, a move meant to ease the spread of infections by keeping people at home and out of health care settings frequented by COVID-19 patients.

CMS covered 1.7 million virtual visits during the final week of April, up from the typical weekly tally of 14,000 consultations via phone or video before the pandemic struck, according to the executive order.

Under the order, within 60 days CMS must propose a regulation that would extend Medicare coverage for telehealth services even after the expiration of an ongoing public health emergency declaration for COVID-19.

The order categorized telehealth services as "flexibilities" and also told CMS more generally to extend "the services, reporting, staffing and supervision flexibilities offered to Medicare providers in rural areas" during the pandemic.

Wider coverage for services is only one aspect of the telehealth leeway created by the coronavirus crisis; officials have also temporarily dropped restrictions on which types of doctors can deliver telehealth services as well as the settings and geographic areas where patients receive them, but most of that leeway can only be permanently allowed by Congress.

"Our regulatory authority outside the public health emergency is largely limited to the types of services that can be provided via telehealth," CMS Administrator Seema Verma told reporters at a Monday briefing before Trump's news conference.

It's likely that the abundant use of telehealth during the pandemic will give regulators enough data to alleviate some of the concerns that lawmakers have had about an enduring expansion, Alex Azar, secretary of the U.S. Department of Health and Human Services, told reporters Monday.

"The experience of the pandemic and allowing telehealth in this context will provide an evidence base for us to challenge some of those assumptions that have always been a barrier to getting Congress to expand telehealth because of the assumption that it would cost too much, that it would lead to too much utilization," he said.

Monday's order also told HHS to work with the U.S. Department of Agriculture and the Federal Communications Commission to "develop and implement a strategy to improve rural health by improving the physical and communications health care infrastructure available to rural Americans."

Trump's order also called for HHS to announce within 30 days a pilot project that would "give rural providers flexibilities from existing Medicare rules, establish predictable financial payments and encourage the movement into high-quality, value-based care."

To authorize such a pilot project, the order cited a section of the Affordable Care Act, which Republican state attorneys general — with Trump's support — are seeking to strike down in a pending case at the U.S. Supreme Court.

Senior administration officials last week told reporters that Operation Warp Speed, a $10 billion campaign to rapidly create and distribute one or more coronavirus vaccines, has been making solid progress. The hope has been that vaccine doses will become available, at least for the most vulnerable populations, in late 2020 or early 2021, which would be extraordinarily fast by historical standards.

Trump on Monday suggested that an even shorter timeline is feasible, saying that researchers are "on pace to have a vaccine available this year, maybe far in advance of the end of the year."

The president's eagerness to swiftly push a vaccine through clinical trials has alarmed his critics, who fear that Trump will lean on public health officials to clear an unproven vaccine before the November election, exposing patients to unknown safety risks and jeopardizing public faith in COVID-19 vaccines.

The critics have pointed to Trump's ongoing promotion of the malaria drug hydroxychloroquine for COVID-19 treatment, despite clinical trials failing to find a significant benefit. Against the backdrop of presidential pressure, the U.S. Food and Drug Administration earlier this year authorized hydroxychloroquine for emergency use in some COVID-19 patients, but later revoked the authorization and warned of the drug's possible side effects.

At Monday's news conference, Trump was asked if he "could assure the American people that politics and considerations around the election will not interfere in the science."

Trump offered only a few words in response, and they were somewhat difficult to hear. But he seemed to say that he could "absolutely" offer such an assurance, or that there would "absolutely not" be political interference.

The president on Monday also fueled fresh speculation about possible action on health policy when he reiterated his intention to roll out some sort of ambitious health care plan.

Trump first sparked the speculation in a recent Fox News interview that saw him grilled for trying to invalidate the ACA in the middle of a pandemic without any public proposal to help tens of millions of Americans who rely on the ACA's coverage and protections for consumers with preexisting conditions.

Without offering explanation, Trump told the Fox News interviewer that the Supreme Court's recent immigration decision on Deferred Action for Childhood Arrivals, or DACA, would empower him to act on health care.

"We're signing a health care plan within two weeks, a full and complete health care plan that the Supreme Court decision on DACA gave me the right to do," the president said in the July 19 interview.

No such plan has emerged from the White House in the ensuing two weeks, but Trump on Monday insisted it's on the way.

"We're going to be introducing a tremendous health care plan sometime ... hopefully prior to the end of the month," the president said. "It's just about completed now."