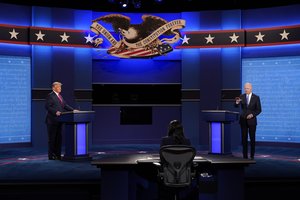 "I don't understand why this president is afraid to take on Putin when he's actually paying bounties to kill American soldiers in Afghanistan," Biden said.

But Trump downplayed his foreign investments and said he closed one of his Chinese bank accounts before running for office, while noting that he was an international businessman with bank accounts "all over the world" before he became president. Trump also defended his relationships with foreign leaders, including Kim, and said President Barack Obama left him "a mess" that would have resulted in nuclear war, if it weren't for him.

"I have a very good relationship with Jong-un," Trump said. "We have a different kind of relationship and there's no war."

Trump also touted his administration's 25% duty on dumped Chinese steel and pointed out that when Biden was serving as vice president under Obama, the administration conducted four nuclear tests.

But Biden defended the tests, which he called "military maneuvers," and said he would continue to do them if elected so that the U.S. can "control" foreign powers. Biden pointed out that under Trump, the U.S.'s trade deficit with China has gone up, and Biden downplayed the importance of maintaining good relationships with the three foreign leaders, whom he repeatedly called "thugs."

"We had a good relationship with Hitler before he invaded Europe," Biden said. "Come on."

For his part, Biden called for tightening federal rules governing American companies that have foreign affiliates in order to protect U.S. intellectual property, and he repeatedly said if he's elected he'll ensure that China would "play by international rules," particularly in the South China Sea, where alleged unauthorized Chinese military presence has been escalating tensions.

Biden added that he would uphold steel tariffs issued under Obama, and he vowed to ensure that 11 million immigrants, including those who benefit from the Deferred Action for Childhood Arrivals program, would have a path to citizenship within 100 days of taking office. He also criticized Trump for creating a policy that has separated immigrant families seeking asylum at the border, and noted that there are reports that the government hasn't been able to reach the parents of 545 detained immigrant children in custody.

But Trump defended his hardline stance on immigration and criticized the previous administration's so-called catch and release practice in which immigrants seeking asylum would be allowed to enter the U.S. and remain in the country while their asylum applications were pending.

Trump said immigrant children are brought to the borders by drug cartels, and the catch and release policy was a "disaster" that allowed murderers, thieves and criminals to stay in the U.S. The president also touted the 400 miles of "brand new wall" that's been built along the southern U.S. border with Mexico since he's taken office.

Trump added that less than 1% of asylum seekers who are allowed to enter the U.S. would return to immigration officials after being released, and those who did had the "lowest IQs," but Biden repeatedly replied that the purported statistic is "simply not true."

Aside from international relations, the presidential candidates sparred over taxes, climate change and their different philosophies over the federal government's role in the health care system, with Trump accusing Biden of wanting to create "socialized medicine," and Biden defending the Affordable Care Act, which was enacted under Obama and is being challenged before the U.S. Supreme Court.

Biden claimed that getting rid of the ACA would leave 22 million individuals without health insurance during the coronavirus pandemic, which has already caused 10 million people who lost their jobs to lose coverage. If the high court finds the ACA runs afoul of the U.S. Constitution, Biden said he would create a public health insurance option to keep drug and health care prices competitive.

The second debate took place in Nashville, Tennessee, in an event moderated by NBC News' Kristen Welker, and it was notably less volatile than the first debate, which focused on the Supreme Court and at times devolved into name-calling. The election is Nov. 3.