Law360 (February 27, 2021, 6:54 AM EST) -- House lawmakers approved a $1.9 trillion package of economic incentives designed to combat the coronavirus pandemic early Saturday, but its fate is uncertain in the Senate, where bipartisan objections to raising the minimum wage could derail the legislation. 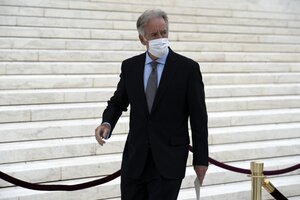 The House by a vote of 219 to 212 approved H.R. 1319, the American Rescue Plan, a bill that would provide $1,400 economic stimulus payments and enhanced tax credits for families and individuals as well as tax incentives for small businesses and paid emergency sick leave for workers, among other relief.

Congressional Democrats want to approve the pandemic relief legislation well before a March 14 deadline, when federal jobless benefits approved in December will expire. Senate lawmakers are expected to pass the measure during the first week of March, leaving time to resolve any differences over minimum wage increases with the House version of the legislation.

The bill would provide $350 billion in funding to state, local, tribal and territorial governments that can be used to replace lost, delayed or lowered revenues from the pandemic. It would send $20 billion to tribal governments to use for direct COVID-19 relief for personal protective equipment, internet access, telemedicine, clean water and electricity development. It also would allow the Pension Benefit Guaranty Corp. to provide direct assistance to roughly 200 financially struggling union pension plans. The provision follows a mold laid out in the Butch Lewis Act, H.R. 397, which passed the House in 2019.

The $1,400 stimulus payments from the Internal Revenue Service would go to individuals with adjusted gross income of no more than $75,000, or $150,000 for couples. The bill would also increase the child tax credit to $3,000 in certain cases, or $3,600 for children under age 6; expand eligibility for the earned income tax credit; and extend credits to reimburse employers for workers' paid sick leave, among other tax changes.

The tax provisions in the legislation, which were approved Feb. 11 by the House Ways and Means Committee, would cost nearly $585.6 billion over the next decade, according to an estimate released Friday by the Joint Committee on Taxation.

"Experts agree that now is the time to go big," DelBene said. "And if we've learned anything from prior recessions, it's that we have to deliver both the immediate relief Americans need now, and sustained support for better days ahead."

Congressional Republicans have opposed the legislation on the grounds that it is too expensive, doesn't create enough jobs and is coming too soon after Congress already approved trillions of dollars in pandemic relief since March.

Rep. Jason Smith, R-Mo., said the pandemic legislation is unnecessary because the nation's GDP and jobless rates will rebound by this fall. He said corporate America loves the legislation because it destroys the small businesses and rewards the corporate elite.

"It's about time we wake up as citizen legislators and defend the American working class not the global elites," he said.

The pandemic relief bill is moving through Congress under an expedited legislative process known as budget reconciliation that will allow Senate passage with a simple majority of 51 votes. However, the inclusion of a $15 minimum wage has put the legislation in jeopardy of losing support from conservative Democrats who view the increase as too generous.

Senate parliamentarian Elizabeth MacDonough has ruled that the minimum wage proposal doesn't have a significant impact on the federal budget, thereby giving Republicans a chance to raise a point of order against it.

"Workers have not gotten a federal pay raise in more than a decade," Wyden said in a statement. "We can't continue to have millions of workers — workers who are disproportionately people of color, women and essential workers like fast food workers and home health aides — earning starvation wages."

House Ways and Means Committee Chairman Richard Neal, D-Mass., declined to pass judgment on the Wyden proposal, saying instead that Senate Democrats would do what is necessary to keep the legislative effort moving forward.

"I think there's broad support here for raising the minimum wage," Neal told reporters, predicting that the House would react to whatever the Senate does. "But I wouldn't prescribe, from my vantage point, giving them any advice on that."

"It seems ludicrous to tax people" for a minimum wage increase that "already is expected to drive $60 billion dollars of higher unemployment checks," said Brady, the Ways and Means Committee ranking minority member. "Makes no sense at all."