Law360 (November 17, 2020, 10:09 PM EST) -- President Donald Trump on Tuesday fired Christopher Krebs, the director of the federal cybersecurity agency that corrected disinformation about the reliability of the Nov. 3 election and called it the "most secure" balloting in U.S. history. 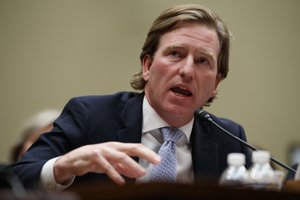 Christopher Krebs, the director of the Cybersecurity and Infrastructure Security Agency, which had rebutted false claims about fraud in the Nov. 3 election, was fired by President Donald Trump on Tuesday. (AP Photo/Carolyn Kaster)

Trump, who has refused to accept President-elect Joe Biden's election victory, tied the decision to oust Krebs directly to a recent statement from the federal official defending the security of the election.

"The recent statement by Chris Krebs on the security of the 2020 Election was highly inaccurate, in that there were massive improprieties and fraud," Trump said in a tweet, before listing claims about alleged voter fraud for which he has yet to offer evidence. "Therefore, effective immediately, Chris Krebs has been terminated as Director of the Cybersecurity and Infrastructure Security Agency."

Krebs, a Trump appointee, had headed CISA, which is an arm of the U.S. Department of Homeland Security, since its creation during the Trump administration in 2018. In recent weeks, Krebs' agency had made several new entries to a webpage called "Rumor Control," in which it debunked disinformation about the security of the vote, including the baseless claim that votes are being cast on behalf of dead people and counted.

It was unclear Tuesday exactly which "statement" Trump was referring to in his tweet. But last week, a high-ranking CISA official was among the election authorities who co-signed a statement calling the Nov. 3 election "the most secure in American history."

In the statement, CISA Assistant Director Bob Kolasky and top officials from the U.S. Election Assistance Commission and National Association of Secretaries of State all vouched for the reliability of the election, citing the fact that all of the states with close results, including Georgia, have paper backup records of each vote.

"There is no evidence that any voting system deleted or lost votes, changed votes, or was in any way compromised," the officials wrote.

Krebs did not sign his name to that statement, but tweeted that "America, we have confidence in the security of your vote," and that "you should, too." Krebs has also backed up assertions from election security experts that there is no evidence that election infrastructure was manipulated in a way that would have affected the vote count.

Krebs acknowledged his firing in a Tuesday night tweet from his personal account. "Honored to serve," he wrote in the tweet. "We did it right. Defend Today, Secure Tomorrow."

In the wake of the firing, it was not immediately clear who would take over a position viewed as a key voice on the country's cybersecurity strategy, whose role has included warning organizations of new hacking threats and calling for international cybersecurity standards.

"Chris Krebs is an extraordinary public servant and exactly the person Americans want protecting the security of our elections," said Sen. Mark R. Warner, D-Va., in one such statement. "It speaks volumes that the president chose to fire him simply for telling the truth."