The Benefits Of More Alternative Dispute Resolution At GAO

By Noah Bleicher
Law360 is providing free access to its coronavirus coverage to make sure all members of the legal community have accurate information in this time of uncertainty and change. Use the form below to sign up for any of our weekly newsletters. Signing up for any of our section newsletters will opt you in to the weekly Coronavirus briefing.


Law360 (January 12, 2021, 5:35 PM EST) -- In late December, the U.S. Government Accountability Office issued its highly anticipated Bid Protest Annual Report to Congress.[1] The statutorily mandated report contains an array of information about the GAO's bid protest forum over the prior fiscal year, including the most prevalent reasons the GAO sustained protests along with a variety of statistical data.

The data points that typically gain the most attention are the total number of cases filed (2,149 in fiscal year 2020; the number of protests sustained (84, or 15% of merit decisions); and the effectiveness rate (51%), which reflects the proportion of cases where the protester obtained some form of relief, either in the form of a GAO sustain decision or voluntary agency corrective action.

Why is the focus on developed cases insightful? The GAO does not conduct alternative dispute resolution to resolve protests where the agency voluntarily takes corrective action before the submission of an agency report; those matters are promptly dismissed by the GAO as academic. Likewise, the GAO generally does not use alternative dispute resolution to close a procedurally deficient filing; those matters typically are dismissed without substantive development.

Put simply, not every matter before the GAO warrants a comprehensive, substantive decision on the merits, especially where the issues are not legally complex or novel. From the GAO's perspective, removing the need to draft a substantive decision frees the forum's bid protest hearing officers to focus on the more nuanced and multifaceted matters the office regularly resolves. These are the cases where a written decision benefits the procurement community.

Arguably nothing is gained from publishing yet another decision denying a perfunctory "mere disagreement" evaluation challenge. And from the perspective of the protester or contracting agency, there are benefits to learning the likely outcome of the case earlier in the process. An agency can more quickly undertake any necessary corrective actions or, in the case of a deny outcome and a withdrawn protest, lift the stay of performance and obtain the goods or services under protest.

As the GAO acknowledges, the office's accelerated protest resolution procedures, including alternative dispute resolution, serve to minimize disruptions to the procurement cycle.[3]

Alternative Dispute Resolution at the GAO

The GAO bid protest hearing officers conduct three types of nonbinding alternative dispute resolution: negotiation assistance, litigation risk assessment, and outcome prediction. In negotiation assistance alternative dispute resolution, the GAO attorney assigned to the protest simply assists the parties in reaching agreement on resolution of the matter. The GAO attorney highlights to the parties their areas of agreement, narrows the areas of disagreement, and encourages them to come to a resolution on their own.

This type of alternative dispute resolution is most effective to resolve solicitation challenges or disputes regarding the scope of corrective action. For instance, the GAO may seek common ground as to whether a solicitation amendment or the disclosure of additional information to all offerors could resolve the protest issues to the protester's and contracting agency's mutual satisfaction. This is the least common type of alternative dispute resolution utilized at the GAO.

In litigation risk assessment alternative dispute resolution, the GAO attorney assigned to the protest offers an informal view of the possible range of outcomes of the protest. This type of alternative dispute resolution is most appropriate where additional substantive briefing or a hearing is on the horizon, and the GAO seeks to focus the parties' attention on the potentially dispositive issue in the protest. Once advised of the apparent risks in their respective positions, the party ostensibly facing the uphill argument has the option to pull the plug on the matter rather than submit further briefing.

The alternative dispute resolution session is conducted after the matter has been fully briefed, the record is closed, and the GAO Procurement Law Division management has been consulted and agrees on the likely outcome of the case. For the alternative dispute resolution to be considered successful, the party who the GAO advises will likely lose the case must take action to obviate the need for a written decision on the merits — that is, either the contracting agency takes corrective action or the protester withdraws the matter.

While it is a good bet that the contracting agency will take corrective action if the GAO advises that it intends to sustain the protest, the GAO frequently conducts outcome prediction alternative dispute resolution where it intends to deny the protest. In these cases, even though the record is closed and no additional briefing is on the horizon, a protester often is still inclined to withdraw its protest when provided that option.

The primary example is where the matter implicates a protester's negative past performance. Because the GAO usually does not redact past performance information in its published decisions, a protester may prefer to withdraw its protest rather than have potentially embarrassing performance information published. Similarly, where the dispute centers on the reasonableness of proposal weaknesses, the protester may prefer those criticisms not be disclosed publicly.

Indeed, between fiscal years 2001 and 2006 — where the GAO saw on average only 1,312 cases each year — the GAO employed alternative dispute resolution in more than 30% of developed matters. 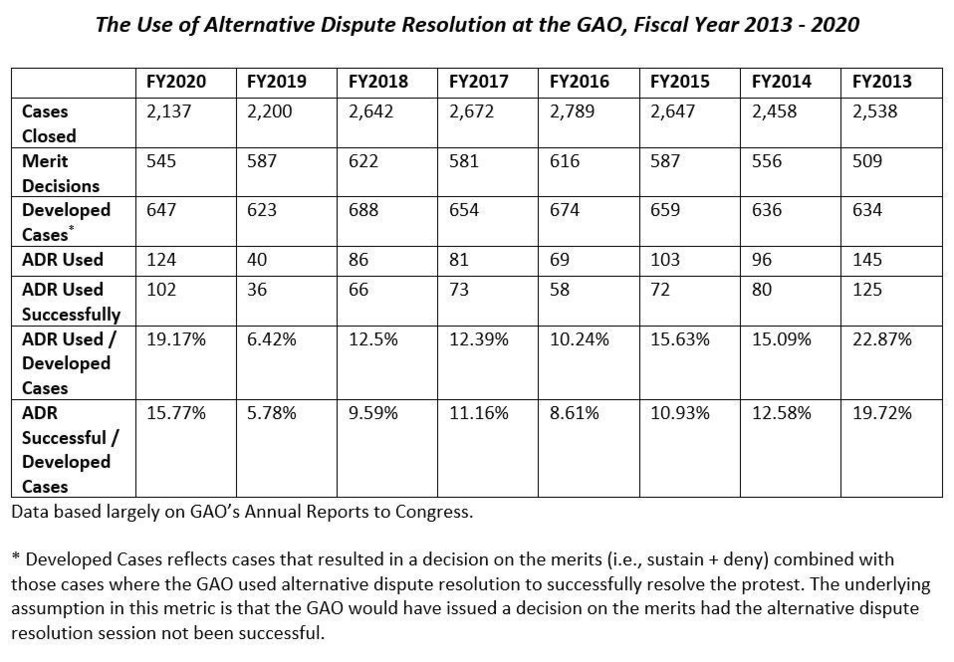 Alternative Dispute Resolution in Fiscal Year 2020 and Ahead

Course correction was warranted. So, the GAO's Procurement Law Division likely recognized the surprising downtick and recalibrated, as reflected in this year's numbers.

Second, it is likely the coronavirus pandemic led to an increase in alternative dispute resolution at the GAO. Numerous GAO stakeholders are involved in publishing a protest decision. From the writing attorney who takes the first pass at drafting the decision to the multiple levels of subsequent internal substantive review and technical editing, the process is robust and — at least as of a couple years ago — paper-heavy.

While the GAO's bid protest team has undoubtedly adjusted to the complexities of working remotely since midway through the last fiscal year, shepherding a draft decision to a publishable work product has always been an onerous endeavor, and navigating this phase of the protest process in a strictly telework environment likely introduced new challenges.

Consequently, while the use of alternative dispute resolution occasionally serves as an internal case management tactic to alleviate the competing burdens of getting merits decisions out the door within the GAO's aggressive statutory timeframes, this may have been especially true this year. In my view, the pandemic likely exacerbated the reality that sometimes it is simply easier for the GAO to resolve a protest through the use of alternative dispute resolution instead of issuing a public decision on the merits.