By Y. Peter Kang
Law360 is providing free access to its coronavirus coverage to make sure all members of the legal community have accurate information in this time of uncertainty and change. Use the form below to sign up for any of our weekly newsletters. Signing up for any of our section newsletters will opt you in to the weekly Coronavirus briefing. 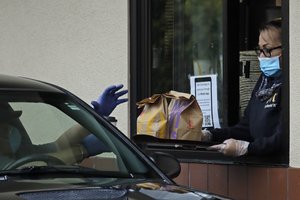 A McDonald's worker hands food to a customer in Hayward, California, in April. Workers at an Oakland McDonald's are suing over what they called a "cold-hearted economic decision" by the restaurant's owners to ignore evidence of a COVID-19 outbreak. (AP Photo/Ben Margot)

The suit also claims the restaurant's owners and managers failed to inform workers they had been exposed to the virus and have them self-quarantine, and failed to implement proper social distancing or cleaning protocols. The complaint was filed in Alameda County Superior Court by Yamilett Hernandez, three other employees of the franchise owned by VES McDonald's and Hernandez's 10-month old baby, who also contracted the novel coronavirus.

Four of the five plaintiffs have tested positive for COVID-19 and they allege that a total of at least 11 workers have tested positive and caused at least six family members to also contract the virus. The suit claims the outbreak "is directly attributable to defendants' cold-hearted economic decision in May 2020 to ignore substantial, inescapable evidence of rising infection levels among workers."

In addition, the employees allege the restaurant's managers in March provided employees with face masks made out of unused dog diapers or coffee filters.

"After workers complained, defendants provided disposable masks but required workers to use them for multiple days, instructing employees to wash and reuse them until they fell apart," the suit said.

In May, despite knowing employees had tested positive for COVID-19, the defendants refused to close the restaurant, institute cleaning protocols or other precautionary measures, or give workers sick leave, which prompted the employees to go on strike May 26 and file a complaint with the California Division of Occupational Safety and Health two days later, according to the suit. The restaurant has been shuttered since the strike, the complaint states.

The workers seek a temporary restraining order forcing the restaurant to remain closed until it complies with minimum COVID-19 health and safety standards and Oakland's paid sick leave laws.

The lead attorney for the workers, B.J. Chisholm of Altshuler Berzon LLP, said the restaurant has put profits ahead of the health of its employees and customers.

"The company knowingly, recklessly and callously exacerbated the spread of COVID-19 in its restaurant and the community at large," she said in a statement. "Because this McDonald's failed to prioritize safety, we are asking the court to step in, for the well-being of the workers and the community."

Michael Smith, the restaurant's owner and operator, sent a statement to Law360 on Tuesday contesting the workers' claims.

"The allegations raised in this lawsuit do not represent the high standards and reality our crew is bringing to life in our restaurants each day," he said in a statement. "We've worked tirelessly since March to enhance nearly 50 processes in our restaurants to put crew and customer safety and well-being as our highest priorities."

Smith added that they have been complying with federal, state and local guidelines, including paid sick leave and personal protective equipment requirements.

"The use of PPE in our restaurant, including masks and gloves, is absolutely mandatory and has been provided to our crew members," said Smith, who noted that they are working with local officials on a reopening plan.

The unsafe practices allegedly include workers being forced to work in close quarters with colleagues and customers who might be asymptomatic carriers, having to reuse dirty masks or gloves if they were provided with such protective gear at all, and being directed to stay mum if workers were absent or suspected of being sick, according to a proposed class action filed in Illinois state court.

McDonald's has said the allegations in that lawsuit are inaccurate and not representative of what's happening in McDonald's 14,000 nationwide locations. The company has defended its response to the pandemic, saying that it's distributed more than 100 million masks to workers and set forth standards that require specific safety measures and protective equipment at its restaurants.

Court hearings regarding a preliminary injunction in that case are ongoing.

Counsel information for McDonald's was not immediately available.

Update: The story has been updated to include a statement from the franchise owner and operator.