Trump's Judicial Picks On Ice As Pandemic Ties Up Senate


Law360 (April 20, 2020, 4:32 PM EDT) -- Republicans have touted President Donald Trump's many appointments to the federal bench, but the coronavirus has halted the confirmation process, derailed the party's drive to fill every judicial vacancy and dimmed the prospect of help for district courts struggling with overwhelming caseloads.

The president made conservative judges central to his 2016 campaign and regularly trumpets the impact his frequently youthful picks will have for decades to come. "Leave no vacancy behind" was this year's motto for Senate Majority Leader Mitch McConnell, R-Ky., who has promised a return to confirmations. A concerted GOP effort has left a single appellate vacancy, but 72 district judgeships remain open and about 40 nominees await Senate action. Before the pandemic hit, it appeared Trump could approach 250 confirmations in his first term. 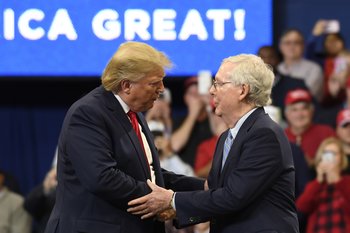 However, the COVID-19 pandemic is keeping senators away from the Capitol until May 4 or later. Routine business is on the back burner, including judicial nominations. Experts and aides told Law360 that senators are unlikely to alter the slow confirmation process, which threatens to cap Trump's total first-term appointments as Democrats fight to retake the White House and the Senate this fall.

"I think [McConnell's] determined to see as many confirmed as possible. They've lost a lot of time, though," said University of Richmond law professor Carl Tobias, who studies the process. "The calendar's working against them now."

2019 was a banner year for confirmations, with 100 judges sent to circuit and district courts. So far in 2020, however, Trump has seen just six confirmations. The process slowed for a month around his impeachment trial and now has ground to a halt, with no confirmations since Feb. 25.

Trump's frustration prompted his unprecedented and implausible threat last week to adjourn Congress so he can make recess appointments, which last less than two years.

The pandemic has simultaneously consumed and emptied the Senate, as members focus on the virus while working remotely. No one knows when confirmations will resume. The White House has announced new picks in recent weeks, but the Senate has stopped processing nominees.

Some senators have urged a widespread shift to remote proceedings during the pandemic, but McConnell has said he does not want to alter the chamber's rules, which require in-person votes.

Some committees have held "paper hearings" with written questions submitted for witnesses to answer, but the Judiciary Committee has not held or scheduled a hearing or vote since March 12. A spokeswoman said Chairman Lindsey Graham, R-S.C., plans to stick with "traditional practices."

A senior Democratic aide who works on nominations said there had not been discussion of remote committee proceedings, adding that "the Senate, in general, is a small-c conservative institution that does not easily modernize or make abrupt changes."

Any procedural changes likely would need bipartisan cooperation, which could be hard to muster.

"I'd be extremely surprised if the Democrats on the committee allowed something to make it easier to hold confirmation hearings," said a former Senate aide who worked on judicial nominations. "It's hard to overstate the amount of bad blood there is now in that committee" after years of intensifying fights capped by the 2018 confirmation battle for U.S. Supreme Court Justice Brett Kavanaugh, the former aide said.

The former staffer suggested that, as social distancing guidelines ease, the committee could resume work with a skeleton crew. Many confirmation hearings see only a handful of senators show up to question nominees. The panel already allows some proxy voting in committee, letting staffers gesture with a thumbs-up or a thumbs-down.

Whenever the Senate returns to something like normal this year, more pressing business could delay nominations even longer.

"How do judges stack up against what might be called essential congressional business?" asked Richard Wheeler, a Brookings Institution fellow and veteran of the Federal Judicial Center.

"Staff and members right now have a singular focus on COVID-19 response," the senior Democratic Senate aide said. "Judicial nominations have not been a focus."

This means a longer wait for federal districts with long vacancies. New Jersey, Washington State and California have not seen a new federal district judge since 2016. The chief judges of two Golden State districts have begged senators for reinforcements as spiraling caseloads cause "a crisis of unprecedented magnitude."

If the pandemic abates, the main challenge would be the calendar, with long breaks planned and about 30 senators campaigning for reelection.

McConnell could cancel the customary August recess to make up for lost time, Tobias said. If Republicans lose either the White House or the Senate in November, the majority leader could use the lame-duck session to push through as many picks as possible.

"Typically, the closer you get to the election the more confirmations dry up," Wheeler said. However, there's no formal prohibition. "It's a myth that it's a rule," he said.

A conservative activist expects the minority party to cite the tradition nevertheless.

"Will Democrats raise it? Always, yes," said Carrie Severino, president of the Judicial Crisis Network. "They are using every procedural roadblock, including some that have far less precedent."

The last time the Senate confirmed a circuit court pick in the second half of a presidential election year was 1992, according to Congressional Research Service data. However, district court confirmations often continued throughout the year, except in 2016, when McConnell denied President Barack Obama any confirmations after July 6 amid a judicial blockade that extended to the U.S Supreme Court.

The Democratic Senate aide reported no sign that McConnell planned to slow down this year, and the minority party is likely to keep dragging out the process when possible.

"I would suspect that cooperation is going to slow down a bit, unless it involves confirming some blue-state judges [backed by] Democratic senators," Wheeler said.

The nominees closest to confirmation are the 10 trial court picks already approved by the Judiciary Committee who only need a floor vote. Several are clearly Democratic picks: a New York prosecutor first tapped by Obama, a Connecticut judge backed by the state's liberal senators and an Arizona pick opposed by half the panel's Republicans after questions about gun rights.

The ready availability of nominees favored on each side of the aisle suggests senators could reach a bipartisan deal to quickly approve some of them.

"The idea of putting together packages, that happens regularly," Severino said. "That's absolutely normal. That used to be the default — you'd have a huge batch of nominees" approved on quick voice votes without a roll call.

But that would depend on Democrats not trying to, as Severino put it, "run the clock here as much as possible."

The former Senate aide questioned whether Democrats have any incentive to cooperate when they're optimistic about retaking the White House — much like Republicans in 2016.

No one knows how the pandemic will ultimately affect the total number of Article III judicial confirmations Trump can tally in his first term, a key campaign promise for the president and a point of pride for McConnell. Trump penned an introduction for the majority leader's memoir that lauds his focus on judges; it does not mention any legislation.

Trump's appointment count stands at 193 — two Supreme Court justices, 51 circuit judges, 138 district judges and two judges on the Court of International Trade. Although the president said Wednesday that he was "close to 250 judges," that number was a stretch even before the pandemic struck. He is unlikely to approach the single-term record of 261 Article III appointments by President Jimmy Carter, who got to fill a slew of newly established seats.

There are 72 district court vacancies, but Tobias said he doubts they could be filled by Inauguration Day next January. Nearly half of those openings lack a nominee, and many are in states with at least one Democratic senator, necessitating cross-party cooperation.

The circuit courts are almost fully stocked, thanks to a laser focus from the White House and Senate Republicans. A former GOP lawmaker is up for the only current appellate vacancy, on the Fifth Circuit, while a McConnell favorite is slated for an upcoming D.C. Circuit opening.

"Virus or not, Trump wasn't going to get many more circuit confirmations," Wheeler said. "If it becomes clear that Trump's going to lose the election, then I think you might see some Republican appointees head for the exits" by taking senior status and creating a vacancy.

"And election or not, I think McConnell will be confirming until they crowbar him out of the chamber."