McConnell Vows Return To Judicial Confirmations In May 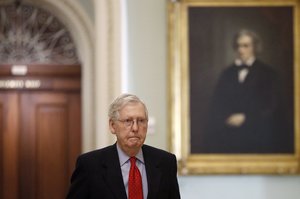 "As soon as we get back in session, we'll start confirming judges again," the Kentucky Republican told the conservative radio host Hugh Hewitt. "We need to have hearings, and we need to confirm judges. ... My motto for the year is, 'Leave no vacancy behind.' That hasn't changed. The pandemic will not prevent us from achieving that goal."

McConnell's comments answer the question of whether senators would put judicial nominations on hold as they continue to address the health and economic consequences of the pandemic, which has taken up much of their focus over the past several months.

The majority leader also expressed interest Wednesday in the radio host's proposal that federal judges be allowed to make their retirements contingent on a successor being confirmed by a certain date.

"Do you believe it's constitutional for a federal judge at any level to turn in a resignation letter saying I will retire provided a successor is confirmed by Dec. 31, and if not, I am not retiring?" Hewitt asked.

McConnell said he thinks there is precedent for such contingent retirements, calling it "something worth taking a look at." U.S. Attorney General Bill Barr had expressed skepticism about the tactic when he spoke with Hewitt a day earlier.

The radio host said he thinks many federal judges are interested in retiring or taking senior status, which allows them to hear fewer cases and open up a seat for a new judge. Hewitt added he would "just want them to be careful that they are not turning their judgeship over to a Democratic president and a Chuck Schumer-led Senate, though I don't think that's going to happen."

Conservatives want to replace as many appellate judges this year as possible in case Democrats were to win the White House or the Senate, potentially making Minority Leader Chuck Schumer, D-N.Y., the majority leader. The New York Times reported last month that McConnell and other Senate Republicans "have been quietly making overtures to sitting Republican-nominated judges who are eligible to retire to urge them to step aside so they can be replaced while the party still holds the Senate and the White House."

The Senate last confirmed a judge Feb. 26 and has only approved six so far this year, with the pandemic halting the confirmation process.

Thanks to rule changes by both parties over the last decade, Senate Republicans can move ahead with confirmations even if Democrats protest that lawmakers should focus only on responding to the coronavirus.

The first nominees eligible for confirmation are the 10 trial court picks already approved by the Judiciary Committee who need only a floor vote. Several have drawn substantial Democratic support: a New York prosecutor first tapped by President Barack Obama, a Connecticut judge backed by the state's liberal senators and an Arizona pick opposed by half the panel's Republicans after questions about gun rights.

About 25 other district court nominees await Judiciary Committee action, around half of them for California. Hewitt named a pair of previously announced picks and referenced "nominees like John Flynn who aren't even up there." He appears to have been referencing Nossaman LLP partner John J. Flynn III, who could be under consideration for the Central District of California. Hewitt had previously mentioned Flynn as a Democrat who could be acceptable to the state's senators as well as Republicans.

Although there are district court picks ready for votes, a former GOP Senate aide who worked on nominations said that Republicans' top priority will be confirming Trump's two latest appellate picks.

Mississippi state Judge Cory T. Wilson is up for the Fifth Circuit, replacing Trump's second-ever failed circuit court selection. The former Republican lawmaker drew Democratic arguments that he was too partisan for the district judgeship to which he was previously nominated.

The minority party may focus on Judge Wilson's vocal opposition to the Affordable Care Act; he wrote in a 2012 column that he hoped the U.S. Supreme Court would strike down the individual mandate. A senior Senate Democratic staffer questioned the "optics" of advancing a judge who has attacked a landmark health care law while the pandemic focuses Americans on the issue. The staffer predicted his confirmation battle could be as divisive as last year's fight over Second Circuit Judge Steven J. Menashi.

The other appellate pick is Kentucky U.S. District Judge Justin R. Walker, a youthful McConnell favorite who has known the majority leader for decades. The D.C. Circuit nominee made national headlines this month with a strident ruling against the Louisville mayor's limitations on drive-in church services for Easter, which the city did not plan to enforce. Josh Blackman, a conservative South Texas College of Law professor, said the judge could have instead resolved the case with a 15-minute phone conference.

Correction: A previous version of this article incorrectly identified an organization where Flynn sits on the board of directors, the St. Thomas More Society of Orange County, a local religious organization not involved in litigation. The error has been corrected.