Lessons From 1st Attys To Argue At The Fed. Circ. By Phone


Law360 (April 15, 2020, 6:21 PM EDT) -- Intellectual property attorneys who argued at the Federal Circuit during its first ever week of telephonic oral arguments said the court has done a masterful job of preemptively addressing their anxieties and running hearings, but their experiences were still impacted by the distractions and unfamiliarity of working from home.

The experience dreaded by many was "surprisingly pleasant," as Locke Lord LLP partner Hugh Balsam put it, largely thanks to thorough planning by the clerk's office, but that doesn't mean attorneys aren't itching to get back in the courtroom and see the judges face to face.

Lawyers have had to come up with a series of fixes to keep themselves focused with kids running around and animals making themselves heard, figure out how to get the sound quality preferred by the courts without dropping their phones, and decide whether it's worth changing out of sweatpants to get in the right mindset.

Here, attorneys who were first on the line for the April 6-10 arguments reflect on what other litigators can expect from the court and provide tips on preparing for these novel hearings.

Breathe, the Clerks Have Your Back

The already overwhelmed clerk's office had little time to get the court in full remote mode during the COVID-19 pandemic, but its success was unquestionable.

"The Federal Circuit did a marvelous job in making it all seamless," said Orrick Herrington & Sutcliffe LLP partner Josh Rosenkranz, who argued for 10x Genomics Inc. on Friday. "I really did not want to argue our case by telephone, but they did everything that they could to make it work."

The week before arguments, the clerk's office sent out a four-page list of instructions and held an orientation over the phone, explaining procedures and what to do if things went wrong. They answered questions, worked out problems, and, when asked, added a second line for clients, colleagues and the public to listen in on arguments.

"It really feel like the circuit executive and the chief deputy clerk, who were the people who ran the logistics of it, went above and beyond in terms of setting up a very well structured procedure and orientation calls," said Venable LLP partner Michael P. Sandonato, who spent Friday representing Canon Inc. in an International Trade Commission dispute. "They really embraced the concept of making this as user-friendly as possible and making it simulate a normal court proceeding as much as possible."

The clerk's office is using an AT&T conferencing system, where attorneys put in their information and are then called by the court. All attorneys arguing that day get on the line about an hour before the first arguments start, and can disconnect once their particular arguments are over, Green Griffith & Borg-Breen LLP partner Caryn Borg-Breen said. Judges are connected, in order of seniority, just before each hearing starts, she said.

Since the office has attorneys' contact information, it can reconnect anyone who gets disconnected, Borg-Breen added.

Alston & Bird LLP partner Shane Nichols, who represented Coca-Cola Co. on Monday, said the clerks were able to control who was muted, further tightening the system.

"It was way above what I would have expected, given how quickly they had to pull this together," Nichols said.

Borg-Breen and Fish & Richardson PC associate Nitika Gupta Fiorella were the first up on Monday, in Clarus Therapeutics Inc. v. Lipocine Inc., and they said there were no first-time technological kinks to work out once their arguments started. The accounts provided to Law360 by attorneys who argued between Monday and Friday were largely similar.

"She handled the technology issues and oral argument issues flawlessly," Reines said. "For a 92-year-old to be able to preside over a hearing as effectively as she did is nothing short of bewildering and inspiring."

It wasn't entirely seamless for everyone, although the glitches were relatively minor.

Attorneys input their information in the AT&T system and are supposed to then receive a call from the clerk's office connecting them to the hearing. But McCarter & English LLP partner Mark Dunn Giarratana, who represented Melanoscan LLC on Wednesday, said he never got that call. He was able to find another way to dial in. He also said a judge got disconnected during his hearing but was promptly reconnected.

Get Comfy (or Not) and Prepare Your Battle Station

Attorneys had strikingly different ways of getting in the zone for their arguments. King & Spalding LLP associate Jonathan Weinberg went into the office for his hearing on Tuesday, representing Certified Aviation Services against EcoServices LLC. He set up a podium with the Federal Circuit in view outside his window.

His opponent, Goodwin Procter LLP partner William Jay, instead mastered how to set up his desk at home: a towel underneath to stop paper from rattling, a Goodwin-issued voice over internet protocol phone directly connected to ethernet so he wouldn't fight his kids for WiFi bandwidth, and a stopwatch to time his arguments, which he presented standing up. 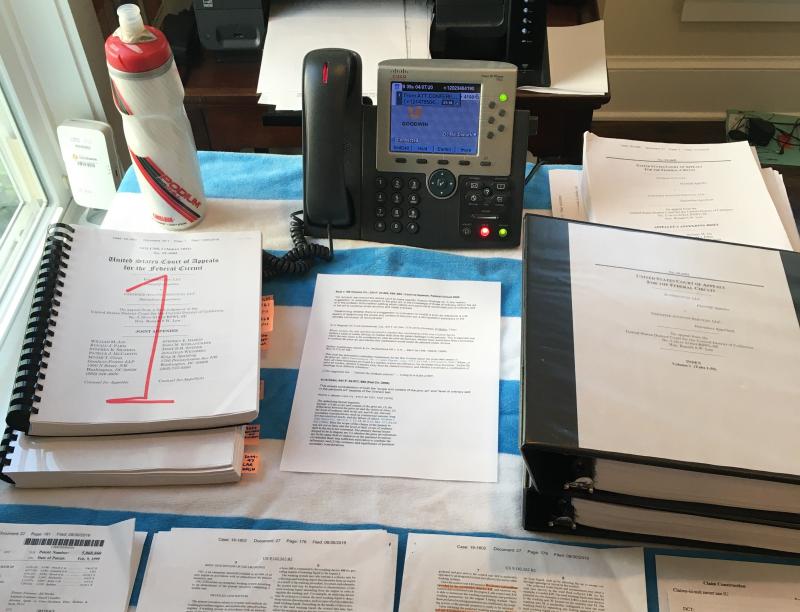 "It prevented me from just looking down at my notes and reading off almost like a script," she said. "Obviously, when you're on the phone you could just read from a piece of paper, but I don't think that makes for as effective a presentation."

This was her first argument to the Federal Circuit, and the panel featured the chief judge, who Fiorella had clerked for. The court promptly issued a Rule 36 judgment in her favor.

Her opponent, Borg-Breen, headed to the firm's empty office to escape a household where three children had switched to electronic learning.

"There's no way I could stay focused and try to find some corner of the house and not have a child opening the door and stumbling in," she said. "My husband took one for the team, and then after I did the argument, I took over for the rest of that week as payback." 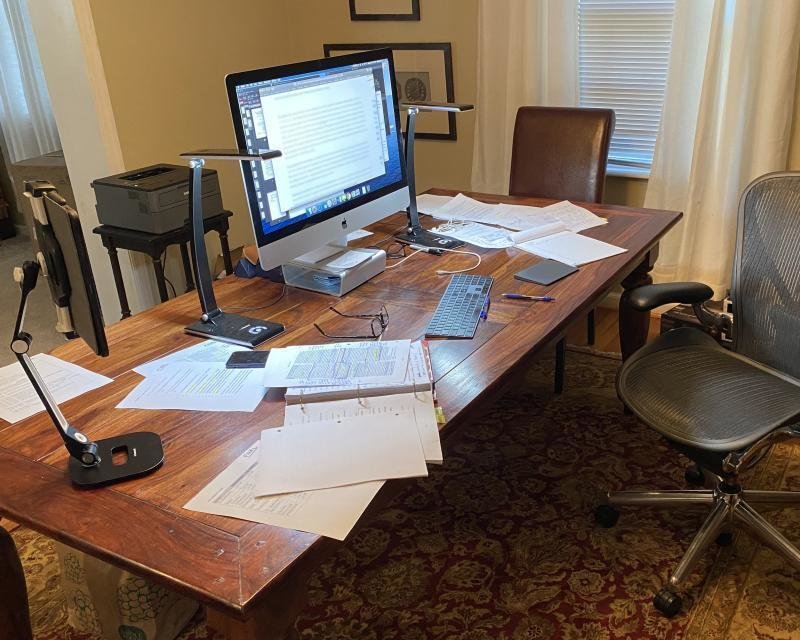 
A big problem was that the Federal Circuit was hoping to get everyone on landlines, something many attorneys didn't have access to. That led many to go into their offices, and others to hope for the best with their cellphones.

Some, like White & Case LLP partner John Scheibeler, used a headset while representing Pfizer Inc. Orrick's Rosenkranz kept his phone in his pocket with wired earbuds, afraid he would stand to get something and forget to take the phone along with him otherwise. He had to practice remembering to take his phone off mute, given that it was out of sight.

Goodwin's Jay turned off all electronics, so the noise of one of his children printing out a term paper wouldn't disrupt the hearing, and Paul Weiss Rifkind Wharton & Garrison LLP partner Steve Baughman hoped that the bird chirping outside his window during practice sessions wouldn't make an appearance when he went live (it didn't). Scheibeler was grateful the landscaper that started blowing leaves during a practice session didn't come back for his hearing.

"I think we can all feel a little bit less self-conscious about those things in the current environment, because unlike a case where judges are in a courtroom and [let you call in] as an accommodation, they're at home too," Jay said. "Judges may well have people or dogs or grandchildren or mailmen or doorbells distracting them as well."

With the clerk's office calming everyone down about the logistics, the main fear left was whether every hearing would be a constant stream of people talking over each other — most terrifyingly, talking over federal appellate judges.

So attorneys practiced speaking slowly, leaving pauses regularly for judges to jump in with questions — which the judges happily did. Rosenkranz said he spent his entire career teaching himself not to say "um" or other fillers, and now had to teach himself to do just the opposite so the judges wouldn't think he disappeared while formulating the answer to a question.

"The silences last longer," he said.

Across the board, attorneys missed being able to read the judges for visual cues, whether it was knowing they were liking an argument or ready to move on, or that they were hoping to ask a question. The lack of body language was felt deeply.

While Federal Circuit veterans like Reines know the judges well enough to be able to picture their expressions just from their voices, others struggled to walk out with a firm sense of how their cases went. Borg-Breen said it felt like "talking to a wall."

Paul Weiss' Baughman, who was representing Chugai Pharmaceutical on Friday, suggested asking regularly whether the judges have questions before moving on, just to keep everything as clear as possible.

"You do get pretty continuous feedback about whether the court feels like it has enough information on something, but you find yourself having to make that [explicit] when you're on a phone call," Baughman said.

For those struggling to tell the judges' voices apart while arguing, Balsam noted that the AT&T screen will show who is talking.

First-timer Fiorella said she felt she had an advantage by not having a set way of conducting Federal Circuit arguments already, and it's a mindset seasoned Federal Circuit veterans may want to embrace to an extent.

Rosenkranz said he was thrown off by having to switch gears after arguing in person for so many years. For example, he wasn't used to keeping track of his own time.

The Orrick partner said he put a sticky note over his notes to make sure he started his timer and waited for the court's recording to begin before launching into his arguments. He then put another sticky note over where he planned to take notes on rebuttal to remember to mute his phone.

"I think it might have been different if I hadn't done this so many times in a particular way," he said. "I was mostly fearful of doing things the way I've always done them and not adapting, being muscle memory was reinforced so starkly."

The court is using a "surprisingly loud" bell to let attorneys know their time is up, Baughman said. But in the meantime, attorneys have to keep track of their own time and hope it's the same as the court's.

Despite the frustrations of adapting, some attorneys said having hearings by telephone may not be a bad practice to keep around — presuming all parties consent to it.

For example, Reines said his California-based client was able to have four top people call in to listen, something that wouldn't have happened if the hearing took place in-person, and which the client greatly appreciated.

"In retrospect, I think it was easier to do it this way," said Nichols, in a sentiment definitely not shared by all. "Not having to travel to D.C., not having to spend the night before an important argument somewhere else besides your own bed, the loss of time for travel, just the fact that it was far less daunting to sit at my dining table and make the argument — I think the arguments benefited from that."

Update: This story has been updated to include Borg-Breen's full name and firm.