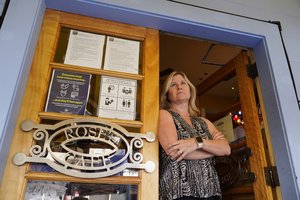 Laurie Thomas owns two restaurants in San Francisco, including Rose's Cafe. In September, she said California's Proposition 15, which would remove certain constitutional property tax protections from commercial and industrial properties, would be "one more nail in the coffin" for her industry. (AP Photo/Eric Risberg)

Voters in California will choose whether to raise up to $12.5 billion annually in exchange for peeling back certain commercial property tax protections that have been enshrined in the state constitution since Proposition 13's approval in 1978. Meanwhile, Illinois residents will be asked to lift the state constitution's prohibition against a graduated income tax — a move that supporters say could generate up to $3.4 billion in yearly tax revenue.

Up north in Alaska, an initiative seeks to impose an additional $1.1 billion in annual taxes on oil production from certain fields. And a measure in the Portland, Oregon, metropolitan area would levy a payroll tax on businesses — some of which are still grappling with a statewide gross receipts tax that was enacted in 2019.

Additionally, Arizona, Montana, New Jersey and South Dakota will vote on whether to legalize and tax recreational marijuana, potentially adding millions to their coffers.

Here, Law360 profiles these high-stakes measures that are primed to garner significant attention on Nov. 3.

Proposition 15 in California seeks to create a split-roll property tax system by eliminating commercial and industrial properties from certain constitutional tax protections approved in the state's landmark Proposition 13 that voters approved in 1978.

The initiative would assess certain properties on their fair market value rather than by the current method, which limits property taxes to 1% of the purchase price with minimal adjustments for inflation. The proposal's supporters have called the proposed assessment method long overdue, projecting that it could raise up to $12.5 billion annually by having larger business properties pay taxes in line with the properties' true value.

If the hotly contested measure is approved, it stands to increase California property tax collections by about 20%, Manoj Viswanathan, professor at University of California, Hastings College of the Law, told Law360.

The Schools and Communities First campaign, which is supporting the measure, has noted the initiative is meant to apply only to large commercial and industrial properties, as businesses with less than $3 million in real estate holdings in the state would not be subject to the new methods. The measure also has carve-outs for agricultural and residential properties.

In contrast, the Californians to Save Prop 13 campaign has claimed the initiative's ripple effects would be far-reaching, for example, leading landlords to tack the property tax increase onto their tenants' rents.

Some California assessors, including Santa Clara County Assessor Larry Stone, have also come out against the proposition, saying that it would be impossible for them to handle the anticipated eightfold increase of property tax appeals.

Viswanathan said several technical questions remained about how the measure would be implemented, such as the interplay of ownership interest with the $3 million exemption. He said it appears possible that a property worth a few hundred thousand dollars could be subject to the new assessment methods if it has a minority owner who holds $3 million in total real estate.

Such a scenario would likely run counter to the initiative's intent, Viswanathan said, but he added that the measure's language appeared to lack a safeguard against it.

Voters in the Land of Lincoln will choose whether to do away with a flat income tax requirement in the state constitution and by proxy enact companion legislation that would create six tax brackets and raise the corporate income tax rate.

The state's Democratic-controlled General Assembly placed the constitutional amendment on the ballot last year at the behest of billionaire Gov. J.B. Pritzker, a fellow Democrat who has sold the measure as a tool to help fix Illinois' longtime budget woes. The first-term governor has estimated that the measure could generate more than $3.4 billion in annual revenue while only raising taxes on the state's top 3% of earners.

Meanwhile, Republicans, business groups and conservative-leaning policy organizations have pushed back on those claims, arguing that the tax increase would also hit the middle class and all businesses.

If approved, the amendment would switch the state's flat 4.95% personal income tax rate to a graduated tax with rates ranging from 4.75% to 7.99%, and increase the state's corporate tax rate to 7.99% from 7%.

When accounting for the state's 2.5% personal property replacement tax imposed on corporations, the measure would lift the state's total corporate income tax rate to one of the highest in the nation at 10.49%, Breen Schiller, a partner with Eversheds Sutherland, told Law360.

If passed, the amendment could also potentially make it easier for cities, such as Chicago, to impose their own income taxes with the flat-rate requirement extinguished, she said.

While the amendment itself only directly pertains to the Illinois Constitution, Schiller noted that the graduated tax rates wouldn't be cemented into the document and could instead be altered through future legislation.

"This would be a drastic shift," she said. "The rates and the brackets would be set in statute, and they could be changed and raised at any time."

A citizen-led Alaska initiative is seeking to potentially boost state tax revenue from the oil industry by more than $1.1 billion through increasing oil production taxes at the state's richest oil fields in the North Slope.

Additionally, the measure would eliminate certain tax credits, a key point pushed by the Vote Yes for Alaska's Fair Share campaign, which has said Alaska has paid $2.1 billion in credits while only receiving $2 billion in production taxes since a 2013 law changed the state's oil tax system.

Opponents of the measure, including the OneAlaska campaign, which has attracted millions of dollars in donations from large oil companies, have estimated that the initiative may spike taxes on the state's largest industry by 150% to 300%.

Jon Iversen, managing partner of Stoel Rives LLP's Anchorage office, told Law360 that while the amount of the tax increase will depend on fluctuations in oil prices, the question represents "a massive tax increase any way you slice it."

"If there are big discoveries — and there very well may be over time — of solid-producing fields, or ramp-ups in other fields, those may get tagged with this as well," Iversen said.

Two ballot measures from local governments in the Portland region propose a payroll tax of up to 0.75% on businesses with more than 25 employees in the metro area and a 1.5% Multnomah County tax on individuals with incomes higher than $125,000, or $200,000 for joint filers.

Those initiatives come on the heels of metro area voters approving a 1% marginal tax on individuals and businesses to fund homelessness services and housing in May. That measure takes effect in 2021 and will impose a 1% tax on individual annual income over $125,000 or joint income over $200,000, and a 1% tax on profits for businesses with annual income exceeding $5 million.

Kodesch said he didn't believe that complying with the metro tax would add significant administrative burdens for businesses that pay the TriMet tax. However, he noted the proposed tax would be compounded on the various other state and local business taxes that have been enacted in recent years, including Oregon's corporate activity tax, a gross receipts tax that applies to businesses with more than $1 million in gross receipts sourced to the state.

"The employers who are subject to the CAT in the metro area will generally also be subject to this wage withholding tax," he said. "I don't necessarily think this tax would add tremendous complexity, but the bigger issue for businesses would be the expense."

Ultimately, Kodesch said the fate of the metro wage tax could depend on how receptive voters would be to raising taxes on businesses other than those affected by measures that area residents have previously approved. Along with the May measure, Portland voters also passed a 1% clean energy surcharge in 2018, a gross receipts tax on businesses with $1 billion in national revenue and $500,000 in revenue in Portland.

"It'll be interesting to see how voters react to a tax that would be imposed on a broader base, rather than just on companies that would be perceived as big businesses," Kodesch said.

Voters in Arizona, Montana, New Jersey and South Dakota will be asked to have their states become the latest to legalize and tax sales of recreational cannabis.

The measures in Arizona, Montana and South Dakota are citizen-led initiatives that would impose flat excise taxes on marijuana sales. New Jersey's question, which the state Legislature placed on the ballot, would only levy sales taxes on marijuana, although it's expected that lawmakers will hammer out a more comprehensive tax structure, including taxes by weight, in the future.

The Garden State's approach of coming up with a specific, per-ounce tax regime later should keep pot tax revenue from dipping considerably over the long haul as prices drop due to market saturation, Pat Oglesby, founder of the tax policy nonprofit Center for New Revenue, told Law360.

"If you're taxing a percentage of price, as South Dakota, Arizona and Montana are trying to, then your tax is going to go down" over time, Oglesby said. "They're not negligible taxes, but it's not a long-term tax plan."

Arizona's proposed tax structure may present the most long-term challenges of any of this year's initiatives, Oglesby said.

The initiative would forbid raising the proposed 16% excise tax and bar other marijuana-specific taxes from being levied. Additionally, it would impose a 30% cap of combined federal and state excise taxes on marijuana sales, meaning if the federal government ever legalized marijuana and imposed an excise tax greater than 14%, Arizona's rate would then have to be reduced.