Law360 (July 14, 2020, 3:21 PM EDT) -- The Trump administration has agreed to rescind a directive that would have barred foreign students from the United States if their colleges canceled in-person instruction during the COVID-19 pandemic, following lawsuits by a number of universities and states, a Massachusetts federal judge said in a Tuesday hearing. 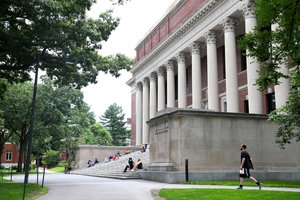 An agreement between the government and Harvard and MIT will allow international students across the U.S. to stay in the country even if their colleges opt for online-only instruction during the pandemic. (Photo by Maddie Meyer/Getty Images)

During the hearing in a case filed by Harvard University and MIT, U.S. District Judge Allison D. Burroughs in Boston recounted her understanding of an agreement between the federal government and those schools.

The hearing was slated for a 90-minute spar between the two sides over a motion for a preliminary injunction. Instead, it ended in less than two minutes, after the parties acknowledged a truce had been reached.

The agreement means U.S. Immigration and Customs Enforcement will revert back to guidance issued in March that allowed international students to remain in the U.S. even if their college or university opts for online-only instruction during the pandemic.

The abrupt course reversal by the federal government moots not only the suit brought by Harvard and MIT but also similar suits filed by the state of New York; a group of universities in the Western U.S.; Johns Hopkins University; a group of international law students at University of California, Irvine; and a coalition of 17 states led by Massachusetts Attorney General Maura Healey.

The schools claimed that the sudden policy shift announced July 6 threw both them and their students into chaos. Some Harvard students attempting to fly to the U.S. were denied entry, according to the university's attorneys.

The colleges argued that the change from the March guidance was an attempt by the Trump administration to force in-person instruction or else risk having foreign students deported or prevented from entering the country.

MIT President L. Rafael Reif released a statement Tuesday saying he was inspired by the support the universities received in their efforts to block the Trump administration policy and said the school stands "ready to protect our students from any further arbitrary policies."

"We at MIT are enormously grateful that so many are paying attention and talking about the important role international students play in our education, research and innovation enterprises here in the United States," Reif said. "These students make us stronger, and we hurt ourselves when we alienate them. This case also made abundantly clear that real lives are at stake in these matters, with the potential for real harm."

In a letter to the school community, Harvard President Larry Bacow also acknowledged the support the university received over the past week and called the directive's withdrawal a "significant victory."

"The directive had disrupted all of American higher education," Bacow wrote. "I have heard from countless international students who said that the July 6 directive had put them at serious risk. These student[s] — our students — can now rest easier and focus on their education, which is all they ever wanted to do."

The case proceeded at a breakneck pace after it was filed on July 8, two days after the policy change was announced.

In addition to the numerous other suits filed around the country, the other seven Ivy League schools and a group of big tech companies including Facebook, Twitter, Google, Dropbox, LinkedIn, Microsoft, PayPal, Salesforce, Spotify and others filed briefs Monday backing Harvard and MIT.

The government filed its own brief Monday defending the policy as enforcing "black letter law," well within the discretion of the executive branch. The law on the books, the government argued, does not permit students to study online and stay in the U.S. on an F-1 or M-1 visa.

ICE showed "leniency" in March when it temporarily allowed foreign students to pursue their studies online during the crisis, the brief stated.

The suits disagreed, claiming the government never offered a rationale for the change.

Healey in her suit said that the federal government "failed to consider the health and safety of our students, faculty, staff, and the untold other residents of our states with whom they interact."

ICE also did not consider the costs and chaos the sudden change would impose on students, some of whom are already trying to return to the U.S. and being denied entry, as well as schools that are scrambling to figure out what their fall semester will look like, the various complaints alleged.

Healey took to Twitter after Judge Burroughs revealed the sudden government shift to point out that the policy was walked back a day after her lawsuit was filed.

"This is why we sue. The rule was illegal and the Trump Administration knew they didn't have a chance," Healey tweeted. "They may try this again. We will be ready."

James, who filed a lawsuit Monday challenging the policy, accused Trump of using international students as political tools to force universities to reopen even though states across the U.S. have experienced spikes in cases of COVID-19.

"Schools should never have to choose between enrolling students in in-person classes and maintaining public health," James said, noting that COVID-19 cases have dropped to an all-time low in New York City since March.