Trump Still In Contempt, Must Tell AG About Docs Under Oath

Law360, New York (April 29, 2022, 2:35 PM EDT) -- A New York judge on Friday rejected Donald Trump's bid to purge his civil contempt and end a $10,000-a-day fine for flouting a subpoena for documents in the state's investigation of the Trump Organization, ordering the former U.S. president to file a new affidavit answering specific questions under oath.

New York Supreme Court Justice Arthur F. Engoron issued a direct order to Trump for the first time, commanding him to submit a new affidavit detailing where he kept his files, how he stored them, who had access to them, how long he retained them and "importantly, where he believes such files are currently located" in order to purge his contempt.

The order came after Justice Engoron rejected Trump's voluntary affidavit filed in the morning, calling it "completely devoid of any useful detail." 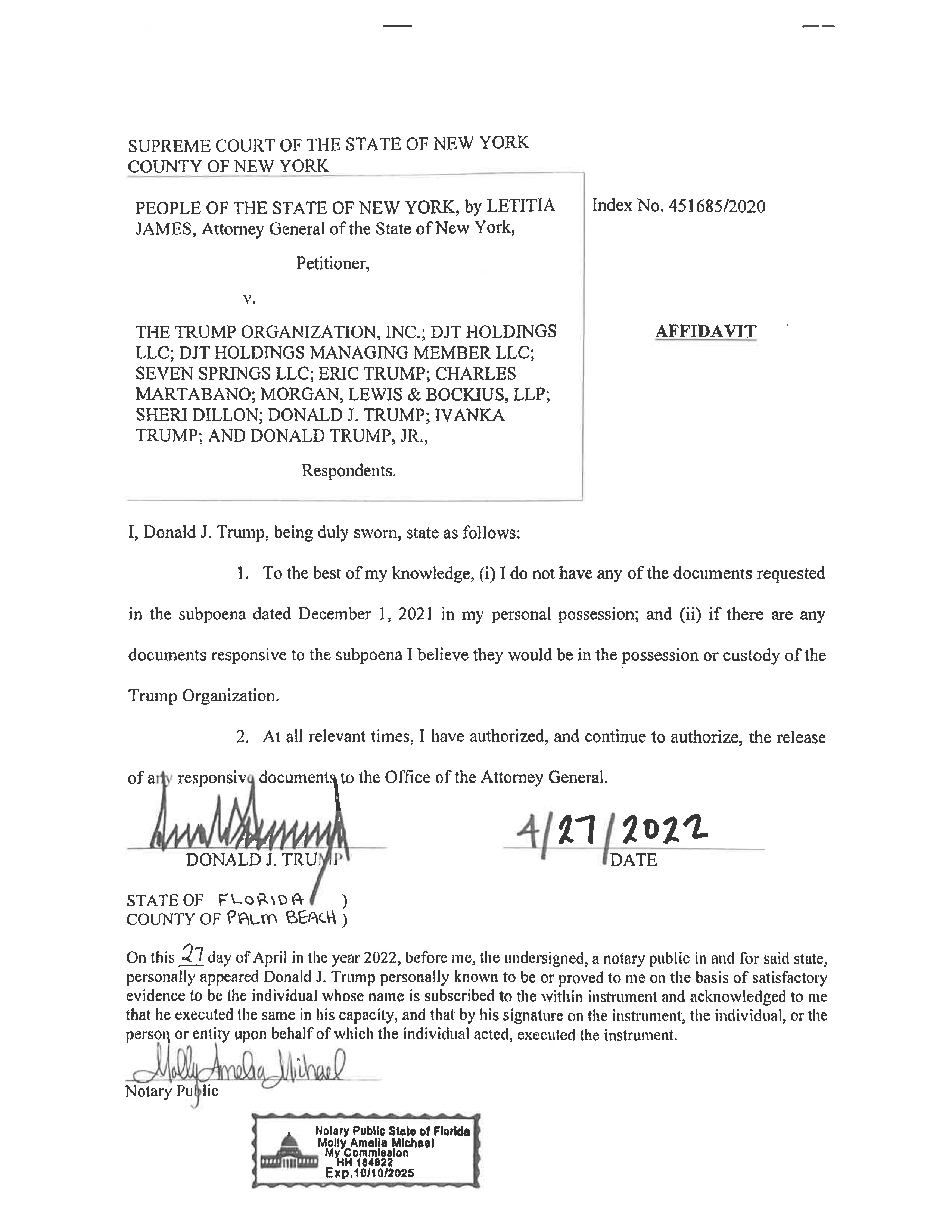 Donald Trump swore in a signed affidavit Wednesday that he does not "have any of the documents" requested in the New York attorney general's financial fraud investigation in a bid to purge his civil contempt. (Expand)

Trump's rejected affidavit, dated Wednesday, had said, "To the best of my knowledge, I do not have any of the documents requested in the subpoena dated December 1, 2021 in my personal possession; and if there are any documents responsive to the subpoena I believe they would be in the possession or custody of the Trump Organization."

As of Friday, he owes $40,000 under a contempt order that was issued Monday, which he has appealed.

In an impromptu off-the-record hearing Friday morning, Trump's attorney Alina Habba of Habba Madaio & Associates LLP insisted the former president was now in compliance and had purged his contempt, pointing to Trump's affidavit, her own and her law partner's. The argument drew a swift rebuttal from counsel for New York Attorney General Letitia James' office, who said the filing "doesn't really cut it" — and the judge agreed.

"The request for me to find that the contempt has been purged is denied," Justice Engoron said in the remote hearing. "My main point is I still want to know who, when, where, what."

"Where did he keep files? I assume it wasn't all in his head," Justice Engoron said, adding that he was "disappointed" with the lack of information from the former president.

"He's Donald Trump. The most famous real estate developer in the world. He runs an organization named the Trump Organization. I'm surprised that he doesn't seem to have any documents," the judge said.

"I think it's fair to say Mr. Trump is famous for using his mobile phones," he added, saying that he would like to see admissible evidence that all the electronic searches demanded by the subpoena had been done.

By the end of the morning hearing, Trump's attorney appeared exasperated and unclear on how to proceed. Habba repeatedly hammered her position that Trump has nothing to give and that the $10,000-per-day fine is useless.

"I don't have more documents to give you," Habba said. "So you could fine us for 10 months ... but you're not going to get any more documents from Donald Trump."

"I just don't think this is contempt," Habba said. She vowed to appeal the new decision.

Counsel for the state said Trump's attorney had failed to show they did a thorough search for the records requested.

"Mr. Trump's affidavit really says not much at all," government counsel Andrew Amer said. "It really doesn't cut it to just ask a person, 'Do you remember if you have documents that meet this subpoena from the past 10 years?' Of course a person is not going to recall."

Amer also argued that Trump could not rely on earlier searches performed by the Trump Organization that the government found so defective that the court ordered an independent company to take over discovery.

"We have a big problem with relying on prior searches," Amer said, arguing that even the additional affidavits requested by the judge would be irrelevant and would not purge Trump's contempt.

The state had moved for contempt after Trump's attorneys failed to turn over a single document by the March 31 deadline. Trump argued the Trump Organization had already given the investigators any documents he might have had, including 10 responsive files already produced by his business.

The judge's Friday afternoon written order also found "Mr. Trump has not yet purged his contempt," in part because his attorneys' affidavits were "insufficient" because they failed to say who searched for each of the eight categories of records requested and when, where and how they were searched. Nor did the attorneys confirm that the data on Trump's electronic devices had been copied and searched.

But the judge said he would consider a last-minute oral motion by Habba to end the fine.

"I will consider your request to eliminate the fine, but if you don't hear from me, it's still in effect — the clock is still ticking," Justice Engoron said.

The case is New York v. The Trump Organization et al., case number 451685/2020, in the Supreme Court for the State of New York, County of New York.

This story has been updated to include information from Justice Engoron's written order.