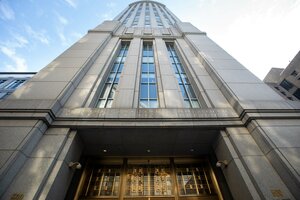 A Manhattan jury on Wednesday found two businessmen guilty of assisting in a plot to let a California weed company process transactions without being flagged. (Michael Nagle/Bloomberg via Getty Images)

The jury made its decision after about six total hours of deliberations following a hard-fought trial before U.S. District Judge Jed S. Rakoff that opened March 1 and closed Monday.

Hamid Akhavan, 42, and Ruben Weigand, 38, each were found guilty on a single count of bank fraud conspiracy. The Manhattan U.S. attorney's office charged them last year with scheming to defraud banks by tricking them into processing more than $150 million of transactions on behalf of San Francisco-based Eaze, a cannabis-selling app nicknamed "the Uber of pot."

Prosecutors said the defendants told "layer upon layer of lies" to build a system of fake websites and third-party dummy companies that allowed Eaze to take federally unlawful payments between 2016 and 2019.

The defense said Weigand and Akhavan had no intention of fooling banks or credit card companies, which in fact made money. A key cooperator who had worked with the defendants described their work as quasi-legal "gray business," with cannabis legalized in California, where Eaze operates.

Ahkavan, who remains in custody over unrelated bail violations, showed little reaction as the verdict was read. Weigand shook his head and looked briefly downward as the jury confirmed the verdict.

Judge Rakoff set a June 25 sentencing date for both men and denied a request by prosecutors to have Weigand — a German citizen — remanded to custody.

Weigand is free on strict bail conditions including the use of private guards. He has shown "total compliance" with his bail conditions, the judge said, casting aside an assertion that the verdict makes him more of a flight risk.

The defense told Judge Rakoff they will attack the verdict via post-trial motions. They also have indicated they would appeal any final judgment. They declined to comment on their way out of the courthouse.

Held in the Southern District of New York under strict safety protocols during the coronavirus pandemic, the trial was marked by a COVID-19 scare in which a juror was excused after reporting a positive test.

Remaining jurors tested negative for the virus on March 8 and the trial continued before another juror was excused on March 15 over virus-related concerns at a school the juror's child attends.

All told, four alternate jurors were excused as the trial went on, leaving a jury of 12 to finish it out with no alternates. One juror from Manhattan, a software developer by training, told Law360 he wasn't concerned about contracting the virus so much as he was about finishing the trial.

"I was just worried about getting through. We had heard half the trial" when the first virus incident was reported, said the juror, who declined to give his name. He said the ability to "make a decision" was important to him.

Other current and former Eaze workers also were given immunity for their testimony.

The government is represented by Nicholas Folly, Tara La Morte and Emily Deininger of the U.S. Attorney's Office for the Southern District of New York.

Update: This story has been updated throughout with additional detail and comment.