By Celeste Bott
Law360 is providing free access to its coronavirus coverage to make sure all members of the legal community have accurate information in this time of uncertainty and change. Use the form below to sign up for any of our weekly newsletters. Signing up for any of our section newsletters will opt you in to the weekly Coronavirus briefing.


Law360 (May 29, 2020, 2:35 PM EDT) -- McDonald's told an Illinois state judge Friday that it believes it can work out a resolution to a dispute with a proposed class of workers who asked the court to require better safety and protection for workers during the COVID-19 pandemic. 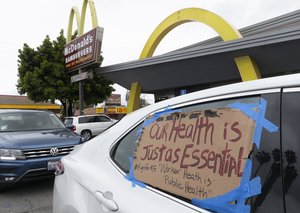 A car stops at a McDonald's drive-thru in Los Angeles on April 6 as part of a protest over working conditions. McDonald's said Friday that it thinks it can reach a deal with workers who filed a suit alleging unsafe practices at four Chicago restaurants. (AP Photo/Damian Dovarganes)

During a public hearing on the workers' motion for a preliminary injunction held via videoconference, Cook County Circuit Judge Eve Reilly opted not to hear oral arguments, and the parties instead held private discussions for roughly an hour in a separate video chat room. When they returned, the judge announced that the hearing would not proceed, as the parties believed they could work out the matter on their own.

McDonald's filed a motion to dismiss the case Thursday, and counsel for the workers on Friday asked the judge for time to brief the matter before discussing it further in court.

In a statement to Law360 on Friday, McDonald's USA said it has issued a 59-page guide outlining national standards for all of its restaurants and has implemented safety practices that include wellness checks, protective barriers, adhering to social distancing guidelines for customers and crew, using gloves and masks, increasing the frequency of handwashing and moving to contactless operations. The fast food giant also says personal protective equipment is in "ample supply for all restaurants," with all restaurants requiring gloves and protective barriers and more than 100 million masks distributed to crew members.

"Crew and managers are the heart and soul of the restaurants in which they work, and their safety and well-being is a top priority that guides our decision making. The safety protocols in question in this lawsuit are already in place in Chicago and our 14,000 restaurants around the country," McDonald's said.

Representatives for the workers could not immediately be reached for comment Friday.

Five McDonald's workers and four of their live-in family members alleged in Illinois state court earlier this month that McDonald's Corp. and several franchisees mismanaged safety protocols in four Chicago restaurants, causing unsafe conditions and a "public nuisance" that could endanger public health. They asked the court to compel the fast food giant to implement safety policies, require both customers and workers to wear masks and to supply adequate personal protective equipment.

The unsafe practices allegedly include workers being forced to work in close quarters with colleagues and customers who might be asymptomatic carriers, having to reuse dirty masks or gloves if they were provided with such protective gear at all and being directed to stay mum if workers were absent or suspected of being sick.

Besides a lack of safety equipment, the workers claimed the stores where they work didn't provide hand sanitizer and didn't offer safety training to employees. In some instances, workers were accused of stealing gloves if they asked for new ones and managers directed them to not talk about colleagues who were infected or who were absent, according to the suit.

The workers and their family members noted in their suit that McDonald's workers in the Chicago area have lodged "at least four complaints" in recent weeks with the Occupational Safety and Health Administration over purportedly unsafe working conditions, but the federal agency hasn't inspected any of the restaurant locations and hasn't ordered the operators of those sites to address the issues the workers have raised.

They are seeking an order that forces McDonald's to supply adequate personal protective equipment and hand sanitizer to workers and to stop any practices that make workers use personal protective equipment in an unsafe way. The plaintiffs are also asking that the court order McDonald's to implement policies mandating face coverings for workers and customers as well as inform workers if one of their colleagues is suspected of being infected and train workers on precautionary measures.

Update: This story has been updated with a response from McDonald's.