Law360 (November 10, 2020, 10:03 PM EST) -- Senators returned to Washington with a full agenda for the short lame-duck session including pandemic relief, government funding and confirming perhaps 20 more judges — starting Tuesday with an Ohio district court pick and including up to three appellate judges.

The Senate faces a substantial to-do list over the next six weeks. The government will shut down Dec. 11 without new funding, and congressional leaders of both parties say they want another relief package this year. First, the upper chamber turned to the judiciary.

U.S. Magistrate Judge James R. Knepp II easily won promotion in the Northern District of Ohio on a 64-24 vote with about half the chamber's Democrats opposed despite support from the state's Democratic senator, Sherrod Brown.

The confirmation vote was the start of Senate Republicans' effort to seat as many of President Donald Trump's judicial picks as possible before this session of Congress ends Jan. 3 and President-elect Joe Biden takes office Jan. 20.

Majority Leader Mitch McConnell of Kentucky said last month that he aims to "run through the tape" and approve judges through the end of the year, including the Seventh Circuit successor to U.S. Supreme Court Justice Amy Coney Barrett. During the now-justice's confirmation hearings last month, Trump announced his choice of U.S. Attorney Thomas L. Kirsch II, a former Winston & Strawn LLP partner.

The Chicago-based Seventh Circuit also could receive a replacement for Judge Joel M. Flaum, who is set to take senior status Nov. 30. In addition, the First Circuit has an open seat after Judge Juan R. Torruella died last month.

McConnell's plan breaks with an informal custom that confirmations slow down late in presidential election years, especially for the appeals courts. The last time the Senate approved a circuit judge in a lame-duck session after a presidential election was 1980, according to the Congressional Research Service.

There are 32 pending district court selections, of whom 15 or 20 could easily make it to the bench.

Eleven are ready for final confirmation votes on the Senate floor, including one more Ohio selection and picks for Florida, Kentucky and Mississippi. The most controversial is Middle District of Florida nominee Kathryn Kimball Mizelle, a 33-year-old Jones Day associate who would be the youngest federal judge since 1986.

Several others hail from blue states, as Senate Republicans have nearly run out of red-state vacancies and may want to approve compromise candidates before Biden gives Democrats more power in the selection process.

Nevada could see state Judge Jennifer P. Togliatti shift to the federal bench if McConnell decides to call a vote on her nomination despite opposition from half of Republicans in committee after questions about her views on nationwide injunctions and the death penalty.

Judge Barbara Bailey Jongbloed, who has been awaiting a floor vote for nearly a year, could join the federal bench in Connecticut after 20 years presiding in state courts.

Other picks for Democratic states are unlikely to advance as senators block consideration of nine nominees for California, five for New York and two for New Mexico. Middle District of Alabama candidate Edmund G. LaCour Jr., a Kirkland & Ellis LLP alum serving as the state's solicitor general, also has not progressed, likely due to opposition from the state's Democratic senator, Doug Jones; Jones' defeat means that two Republicans will negotiate with the Biden administration over Alabama's trial judges, which could give LaCour another chance.

Those are likely to be among the about 30 district court vacancies left for Biden to fill, compared with 88 trial-court openings and 112 total seats when Trump took office, thanks in part to Senate Republicans limiting President Barack Obama to just 20 confirmations in his final two years. 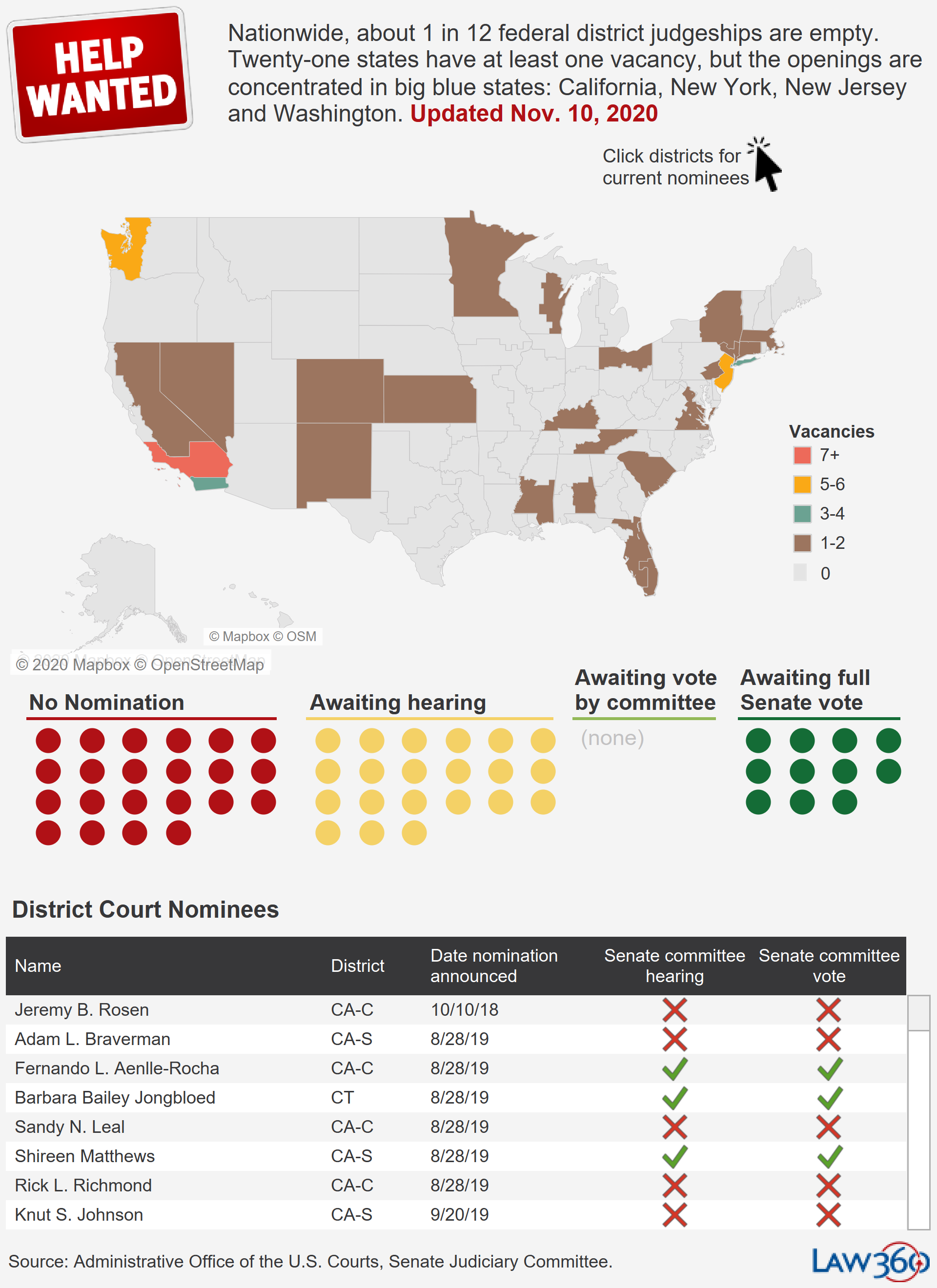 
The Ohio selection confirmed Tuesday, Judge Knepp, took the bench in 2010 after practicing civil litigation for 15 years with Robison Curphey & O'Connell LLC in Toledo, Ohio. He clerked in the district after graduating from the University of Toledo College of Law.

Although Judge Knepp avoided scrutiny at his July confirmation hearing, Democrats sent written follow-up questions that pushed him on immigration rulings during his decade as a magistrate judge.

The panel's top Democrat, California Sen. Dianne Feinstein, asked about a 2015 denial of pretrial release for a defendant in the country illegally, noting the Supreme Court ruled in 2012 that unlawful presence alone is not a crime. The judge replied that the defendant's unlawful presence did constitute a felony because he had been deported several times before.

Feinstein also asked about a 2011 lawsuit alleging that police and U.S. Customs and Border Patrol employed racial profiling of Hispanics where Judge Knepp ruled the defendants could demand the plaintiffs' Social Security numbers in discovery. The judge said the defendants were entitled to nail down the precise identity of the plaintiffs but told the plaintiffs they could claim Fifth Amendment protections if responding would result in self-incrimination.

In response to Democratic questions, Judge Knepp also said he discussed his possible nomination with Dean Reuter, general counsel of the Federalist Society, the conservative group that President Donald Trump said would help make his judicial picks. The nominee said he generally followed the judicial doctrines of originalism and textualism that the group supports.

Judge Knepp said he planned to continue his membership in the National Rifle Association; a pair of GOP-backed Illinois picks recently divided on that issue, with one saying he would leave the group and another saying he would not.