By Hannah Albarazi · Listen to article

Law360 (August 26, 2022, 9:23 PM EDT) -- A Georgia jury's $1.7 billion punitive damages verdict against Ford Motor Co. over a fatal rollover collision shines a light on an alleged defect that previously has resulted in confidential settlements. But the award may not stick, attorneys told Law360, especially if a Georgia law prompts a post-trial settlement.

Elderly couple Voncile and Melvin Hill were killed in 2014 when the Ford Super Duty F250 pickup truck they were driving rolled over on a rural Georgia road. Their sons, Kim and Adam Hill, sued Ford, alleging that the company knew the roof of its Super Duty trucks was dangerously weak yet kept it on the market. 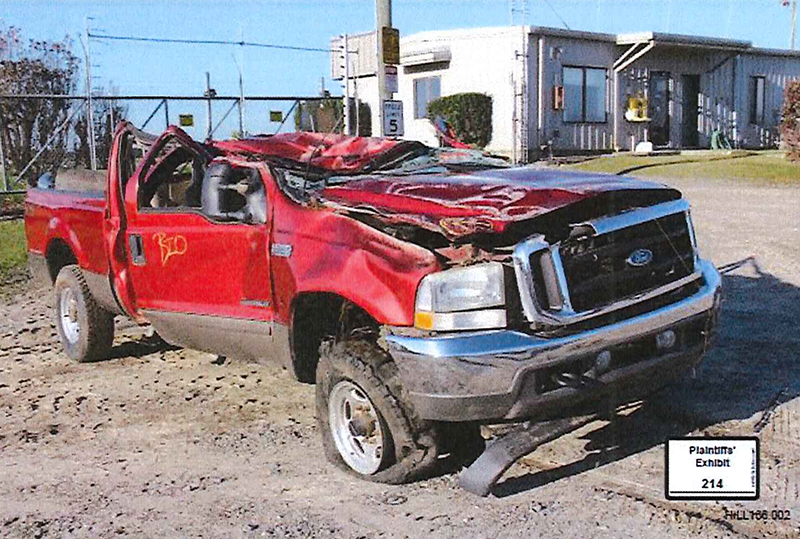 A Georgia jury reached a $1.7 billion punitive damages verdict against Ford Motor Co. in a trial over an alleged roof defect that resulted in the deaths of Voncile and Melvin Hill, who were killed in 2014 when the Ford Super Duty F250 pickup truck they were driving rolled over. (Court Documents)

Ford vowed to fight the verdict.

"While our sympathies go out to the Hill family, we do not believe the verdict is supported by the evidence, and we plan to appeal," Ford said in a statement. "In the meantime, we are not going to litigate this matter through the news media."

Legal experts, including the lead plaintiffs' attorney in the Hill case, James E. Butler Jr., told Law360 that the punitive damages award — which clocks in as the largest-ever in the Peach State — is likely to be slashed by the trial court judge or on appeal.

Another factor weighing on the future of the case is a 35-year-old Georgia law known as a split-recovery statute, which entitles the state to 75% of the final punitive damages.

Legal experts say the potential of this may steer the parties to a settlement.

Benjamin C. Zipursky, a professor at Fordham University School of Law, said the high punitive damages award in the Ford case makes it evident that the jury "accepted the plaintiffs' lawyer's argument that Ford knew about the weak roof problem for decades and did nothing about it."

"This perceived indifference to the possible death of customers evidently incensed the jury," he said.

But he agreed that the punitive damages likely will be dramatically reduced.

, the justices declared that excessively large punitive damages awards violate the due process clause of the U.S. Constitution.

Zipursky, who is an expert on punitive damages and tort law, said that following the BMW decision, the Supreme Court reiterated that punitive damages should not be more than 10 times greater than compensatory damages.

The Hill case saw punitive damages that were about 70 times larger than the compensatory damages.

In other words, punitive damages of $96 million would approach that "worrisome" standard.

Zipursky pointed out that the Hill family's $24 million compensatory damages award is significant for a product liability case, saying that many other states have caps that would have resulted in a far lower award.

Catherine Sharkey, a professor at New York University School of Law who has studied punitive damages and split-recovery statutes, told Law360 that Georgia's statute, in which the state takes 75% of punitive awards, could increase the likelihood of a post-trial settlement.

"There will be a lot of room for settlement," Sharkey said.

With the split-recovery statute, it's in both parties' interest, "if they can, to get together and settle and cut out the state's portion," she said.

Georgia's split-recovery statute is among the highest in the country. However, it allows attorneys to collect fees from the full punitive damages amount before the state has taken its cut.

Butler, the lead counsel for the Hill family and the founding partner of Butler Prather LLP, called the law "absurd," adding that the state has received only one payment under the statute in the last 35 years.

In that case, a Georgia jury awarded $2 million in punitive damages in a product liability bellwether case against C.R. Bard Inc., stemming from the use of transvaginal mesh medical devices. Georgia collected a little more than $782,000 of the punitive damages, minus attorney fees and costs. The Georgia Attorney General's Office did not immediately respond to a request for comment on whether it has collected additional funds under the statute.

Butler argues that the split-recovery law "protects defendants who have no defense, such as Ford in this case, because the statute discourages plaintiffs from going to verdict and getting punitive damages."

Robinette of Southwestern Law School said since punitive damages are not a remedy for a plaintiff's injury, the vast majority of courts addressing the issue have held that a plaintiff has no vested right to them.

"Thus, a legislature is at liberty to split punitive damages between the plaintiff and the state," Robinette said.

While Alaska, Illinois, Indiana, Iowa, Oregon, Missouri and Utah require that a portion of any punitive damage judgment be shared with the state, Georgia's statute singles out product liability cases for apportionment.

California, Colorado, Florida, Kansas and New York formerly had split-recovery statutes, but they are no longer in force.

Still on the Road

For Butler, perhaps the most difficult part of the case is that some 5.2 million Ford Super Duty trucks — manufactured between 1999 and 2016 — that have the same roof as the one on the Hills' truck, remain on the road today.

"Ford knew before it sold those 5.2 million trucks that roof crush is deadly; Ford had known for 20 years that that weak roof was killing and injur[ing] people; Ford knew these roofs were far weaker than others," Butler told Law360.

Ford knew these roofs were the "weakest in the Ford fleet of 31 vehicles" and "made a fortune in profit selling these trucks," Butler said.

There has been no voluntary recall by Ford related to the alleged roof defect, and Butler said a forced recall is unlikely, noting that he knows of just one such recall in the history of the National Highway Traffic Safety Administration: the 1979 Jeep CJ series recall.

Voluntary recalls by Ford, however, are not unheard of. Ford announced a massive recall this summer of nearly 3 million vehicles for an unintentional rollaway risk.

"Obviously, Ford knows about a lot more wrecks of these trucks with rollover, roof crush, and people killed or severely injured" than the lawsuits prior to March 31, 2017, Butler said.

It's not known how many more suits Ford is facing from Super Duty truck rollovers, but some may be headed for trial, while others have wrapped with confidential settlements.

One, filed in Minnesota federal court in March 2021, is on behalf of husband and wife Ronald and Kory James. Ronald James suffered a cervical spinal cord injury when his 2003 Ford F350 rolled over, Ammons said.

"Because the roof of the 2003 F350 is not strong enough to support the weight of the vehicle, it collapses into occupants' survival space," James' suit alleges. Ammons said he expects the trial to take place in early 2023.

Ammons' other case was brought in Nevada federal court in August 2021 on behalf of the family of Luis Aguilar Hurtado. The suit says when Hurtado's Ford F250 rolled over, the roof collapsed, killing him. The trial date will be set after the court rules on the pending motions for summary judgment, Ammons said.

Ammons told Law360 that he has represented several others in Super Duty truck cases.

"Over the last two decades, I have had quite a few of these that were resolved for amounts that were confidential at Ford's request," he said.

Tom Willingham, a Georgia-based attorney at Beasley Allen, told Law360 that his firm has also previously brought suit against Ford over the same alleged defect.

Willingham said in a phone interview that he handled the lawsuit brought against Ford by Mary Ann and Kenneth Huie. He said it is undisputed that the couple was traveling between 13 and 15 mph when their 2007 F250 rolled over. The roof crushed down on them, leaving Mary Ann a quadriplegic and Kenneth a paraplegic. That case ended in a confidential settlement.

Willingham, who has been carefully watching the litigation involving Ford's alleged roof defect, said apart from the $1.7 billion punitive damages verdict reached on Aug. 19, there have been no other cases that went to trial.

He told Law360 that in his view, the "greatest injustice" of the American judicial system is that these types of settlements can be kept confidential, leaving the public in the dark about potential harms.

Leslie Mitchell Kroeger of Cohen Milstein Sellers & Toll PLLC, who has represented plaintiffs in truck roof crush cases against Ford, told Law360 in an email that her cases also have ended in confidential settlements with Ford.

These roof crush crashes "traditionally result in catastrophic injury or deaths," she said.

For instance, Cohen Milstein client Carlos Paz-Orjales reached a confidential settlement in 2018 with Ford over the same defect alleged by the Hill family.

Paz-Orjales had been a fully seat-belted passenger in a 2005 Ford F350 Super Duty King Ranch truck when the driver lost control of the vehicle and the truck rolled over, according to Cohen Milstein's summary of the case.

The firm said the truck's roof caved in and crushed Paz-Orjales, severely injuring his spine and permanently rendering him a quadriplegic.

Another case, brought by the Wisconsin-based law firm Murphy & Prachthauser SC in California state court, also ended in a confidential settlement. That case involved a rollover collision of a 2006 F350 pickup truck in which the roof allegedly crushed the occupant's so-called survival space, leaving the driver a quadriplegic.

"The roof strength is not increased to account for the additional weight of the larger trucks," Payne told Law360.

"Of course, any settlements are confidential as is required by all manufacturers," he also said.

Butler, fresh off his trial win, told Law360 that if one of those Ford trucks still out on the road rolls over, "someone will be killed or severely injured."

His advice to drivers of these trucks is to "park them" and "sue Ford."