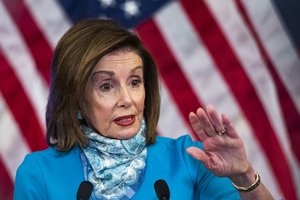 The Heroes Act is set for a House vote Friday but marks just the beginning of negotiations. Veterans of Capitol Hill describe it as the opening salvo in a weekslong process that must satisfy Senate Republicans and President Donald Trump.

The speaker, a California Democrat, noted somber statistics from the pandemic: more than 80,000 American deaths and 33 million unemployment claims.

"This is an historic challenge and a momentous opportunity for us to meet the needs of the American people," Pelosi said in a brief speech. "The Heroes Act focuses on three pillars: opening our economy safely and soon, honoring our heroes and then putting much-needed money into the pockets of the American people."

The top House Republican, Minority Leader Kevin McCarthy of California, tweeted that the proposal was "an 1,800-page liberal wish list that was crafted behind closed doors and includes bailouts for blue states and giveaways for billionaires."

"This is the opening shot in negotiations," Roscoe Jones Jr., a former Democratic chief of staff now at Gibson Dunn & Crutcher LLP, told Law360. "It's unlikely to move in the Senate."

"This bill introduction is the opening salvo in what is likely to be a protracted bipartisan negotiation that could take weeks, if not a month or more, to play out before a bill is finally signed into law by the president," Schnittger told Law360 in an email. "It's a declaration of principles by Democrats in Congress for the upcoming negotiations, as opposed to being a bill they imagine stands a chance of becoming law in its current form."

The top Republican on the powerful Energy and Commerce Committee, Rep. Greg Walden of Oregon, lamented on Friday, "We've really not been invited into those discussions yet." The proposal also faces some pushback from progressives like Rep. Pramila Jayapal, D-Wash., who complain that it does not do enough to guarantee paychecks.

If the House approves the bill, it's likely to languish in the Senate, where Majority Leader Mitch McConnell, R-Ky., told reporters Monday he's focused on "assessing what we've done already" and has not "felt the urgency of acting immediately."

McConnell has said his "red line" for negotiations is a broad liability shield for businesses to prevent "a second epidemic of frivolous lawsuits." The Democratic proposal does not mention such protections, illustrating why negotiations are likely to stretch into June.

The core of the Democratic plan is nearly $1 trillion for state, local, tribal and territorial governments. Some $500 billion would go to states and the District of Columbia, partly allocated based on population, COVID-19 prevalence and unemployment levels. It would give the flexibility that many states have sought to use funding to cover pandemic-related revenue losses rather than just directly related expenses.

The bill would also include $20 billion for tribal governments and provide them with the same flexibility.

Democrats have tried to cast the funding as preventing layoffs for first responders and teachers, but some Republicans have been skeptical.

Some have harped against "blue-state bailouts" for places with long-standing fiscal crises. On Tuesday, the Republican Study Committee, representing about 150 House conservatives, opposed money that would "reward states that have mismanaged their budgets."

However, some GOP lawmakers have backed funding. Sen. Bill Cassidy, R-La., joined with Sen. Bob Menendez, D-N.J., for a bill with $500 billion that would be distributed according to population, virus cases and lost revenues. Menendez said Monday that two or three more Republican senators would join as co-sponsors.

A senior Senate GOP aide told Law360 last month that "everyone sees the writing on the wall that eventually there has to be something for state and local governments." After floating a bankruptcy option for states, McConnell softened his initial opposition last month, telling Fox News Radio, "There probably will be another state and local funding bill."

There are several proposed modifications to the popular Paycheck Protection Program, which offers forgivable loans to small businesses. Jones, the former Democratic staffer, noted that the bill would address business owners' concerns by setting a minimum loan maturity of five years and extending the covered period for several months.

The bill also would expand PPP eligibility to nonprofits of all sizes while boosting the smallest businesses, requiring that a quarter of the approximately $650 billion program go to nonprofits and another quarter go to businesses with fewer than 10 employees.

The Democratic proposal does not authorize new money for the loan program, which was replenished last month, but it does add $30 billion for other Small Business Administration loans and $10 billion more for disaster loans that can include a grant.

It would also create new cybersecurity mitigation and reporting requirements for the SBA, which revealed a data breach last month impacting nearly 8,000 applications for disaster loans. It would mandate annual reports on its cybersecurity risks, including the use of any Chinese-supplied systems. The agency would have 30 days to tell victims about any future incidents.

The employment-related provisions in the proposed bill would make all employers provide emergency paid leave, require federal safety standards for high-risk workplaces and provide about $200 billion for hazard pay, with $13 hourly raises for almost all nonremote workers.

On health insurance, all private and public plans would have to provide cost-free treatment for COVID-19. A special enrollment period would let people get coverage through the Affordable Care Act marketplaces. The bill would also fully pay premiums for COBRA, the mechanism that lets people pay extra to keep employer-based coverage after losing their jobs, or while they are furloughed during the pandemic.

Health care providers would get reimbursed for uninsured patients with COVID-19. They would also get $100 billion to cover pandemic-related expenses or lost revenues. Another $75 billion would go to testing and contact tracing. The U.S. Department of Health and Human Services would have to develop best practices for privacy and data security.

Help for Individuals and Immigrants

Real estate would see a boost, with $100 billion for emergency rental assistance and $75 billion to help homeowners pay their bills. Another $11 billion would fight homelessness and $6 billion would go to public housing.

Over $6 billion would go to broadband internet access for homes, students and libraries, and Native American communities.

At the same time, the Federal Reserve would be directed to step in with support for debt collectors that offer lenient forbearance programs for affected borrowers. The bill calls for the creation of a Fed credit facility to provide long-term, low-cost loans to help these debt collectors weather financial losses from the forbearances.

The bill offers up to $10,000 of student loan forgiveness for federal borrowers and extends a moratorium on payments and interest accrual.

Unauthorized immigrants working in critical industries during the pandemic would be shielded from deportation. U.S. Immigration and Customs Enforcement, which has seen hundreds of confirmed COVID-19 cases among detained immigrants, would be required to review the cases of all individuals in its custody to determine who could be released.

The bill would increase the number of green cards available while prioritizing green cards and temporary visa processing for foreign health care workers. The bill would also relax requirements for doctors on visas to move to new locations and offer more deadline flexibility for foreigners renewing their work visas.

Additionally, the bill would allow Americans married to unauthorized immigrants who file taxes jointly to get a $1,200 stimulus check, an exclusion that has spurred litigation.

The bill has government contracting provisions that would accelerate payments on all federal contracts, ensure contractors aren't penalized due to pandemic-related disruptions and clarify a major contractor assistance program.

The package also would give the cannabis industry access to the banking system by protecting banks that do business with both state-legal cannabis businesses and industry-adjacent businesses.

The bill proposes a slew of tax changes. For two years, it would eliminate the cap on state and local tax deductions imposed by the 2017 GOP tax cuts and despised in higher-tax and often Democratic states. It would also undo a major provision of the Senate Republican-authored CARES Act that allowed businesses to use net operating losses to lower their tax bills. For low-income taxpayers, it would increase the earned income tax credit and make it available to people without children.